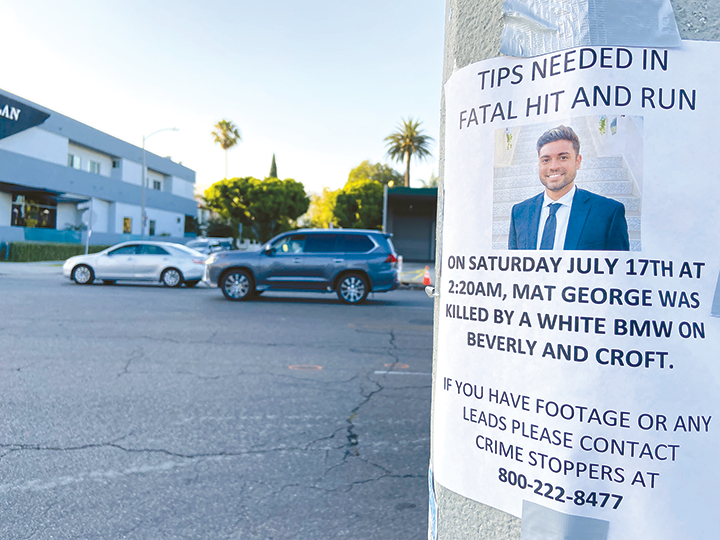 Flyers seeking information about the hit-and-run collision that claimed the life of Mat George have been posted near the intersection where he was killed. (photo by Edwin Folven)

Police are searching for the driver of a white BMW sedan that allegedly struck and killed a well-known podcast co-host on July 17 as he walked across Beverly Boulevard near Croft Avenue.

Investigators from the Los Angeles Police Department’s West Traffic Division said the victim, identified as Mat George, 26, was crossing at a corner where there is no marked crosswalk or stoplight. Authorities said the BMW was traveling east on Beverly Boulevard when it struck George at approximately 2:20 a.m. and kept going. Paramedics pronounced George dead at the scene.

“Witnesses called 911, and there was an individual with the [victim] who observed the traffic collision,” said Officer Joel Twycross, with the West Traffic Division. “We are still in the process of interviewing people, reviewing cameras and investigating.”

“Thank you to everybody who’s reached out,” Okland posted on Twitter. “And thank you so much to everybody telling stories and sharing how he impacted you. Whenever you think of him in the future, please do talk about him.”

“This is so sad to read about,” posted Miracle Mile South resident Medrene Gee. “A life needlessly taken.”

“Prayers for his family and friends. This must stop,” posted Audrey Linden, of Beverly Hills.

Police are hoping someone may know the identity of the driver and will come forward. Twycross said the vehicle was a 2015-21 BMW 5 or 7 series sedan. The BMW sustained front-end damage in the collision and the left side mirror broke off, he added. The city of Los Angeles offers a reward of up to $50,000 for information leading to an arrest and conviction in fatal hit-and-run cases.

“We have gotten a few tips, but we need more,” Twycross added. “We need anyone in the area or anyone who has camera footage to come forward.”