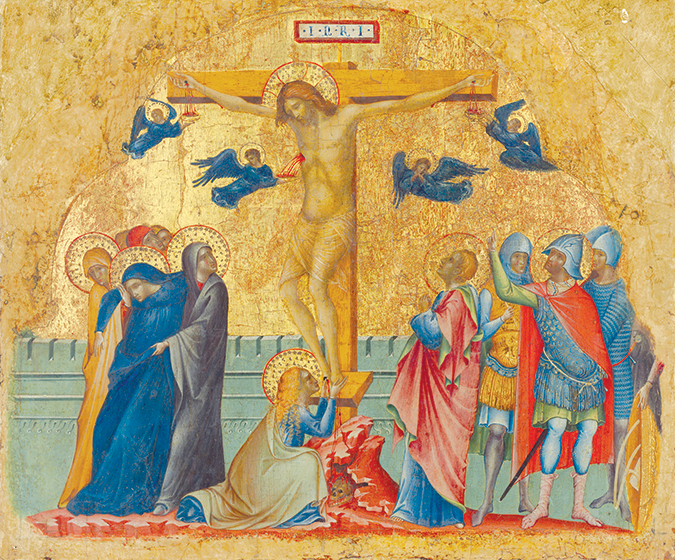 The Crucifixion, circa 1340-1345, Paolo Veneziano. (photo courtesy of the J. Paul Getty Museum)

A new exhibition, on view at the J. Paul Getty Museum, Getty Center, from July 13 through Oct. 3, brings together numerous paintings that reveal the delicate beauty and exquisite colors that distinguish the art of Paolo Veneziano. The centerpiece of the show reunites painted panels that originally belonged together but are now housed in different collections.

“It is fairly commonplace for museums around the world to own fragments of what were once larger ensembles, dismantled in later centuries for sale on the art market,” said Timothy Potts, Maria Hummer-Tuttle and Robert Tuttle director of the J. Paul Getty Museum. “’Paolo Veneziano: Art and Devotion in 14th-Century Venice’ presents a rare exception: a completely intact triptych for personal devotion, on loan from the National Gallery of Parma, Italy. The appearance of this triptych was the basis for the reconstruction of an almost identical triptych, the so-called Worcester triptych, reassembled for the first time in this exhibition.”

Portable devotional triptychs, self-supporting and with closable shutters, were regularly made by artists and craftspeople in Venice throughout the 14th century. It is a type that seems to have been invented in Paolo Veneziano’s workshop.

The reconstruction presented in the exhibition offers a rare glimpse into how the artist’s devotional works were first experienced. Through scientific investigations and visual analysis, Getty conservation scientists and curators determined that a series of panels – now divided between the Getty Museum (Annunciation), the National Gallery of Art, Washington (Crucifixion), and the Worcester Museum of Art (Seven Saints) – were originally part of the same ensemble, a triptych remarkably similar to the one that remains intact in Parma.

In both, narrative scenes from the life of Jesus Christ are combined with iconic depictions of saints. The reconstructed altarpiece is lacking its central panel, which likely depicted the Virgin Mary and Christ Child, as seen in the intact altarpiece in Parma. The missing panel remains to be discovered. The surviving panels have been reassembled for the first time using a specially constructed metal armature. The reconstruction, together with other paintings by Paolo and his workshop, offers a rare opportunity for viewers to explore the unique visual culture of 14th-century Venice.