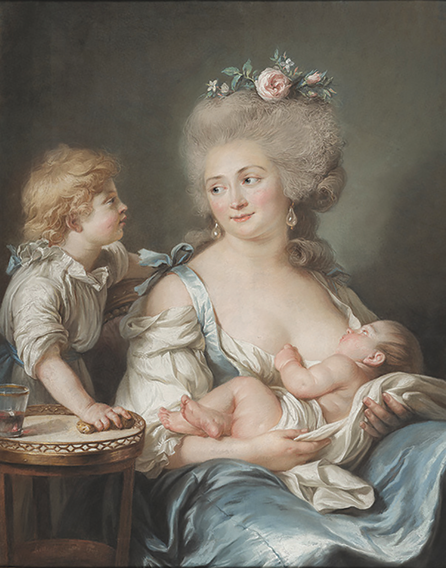 “Portrait of Madame Charles Mitoire with Her Children” was purchased by the Getty on June 16. (image courtesy of the Getty)

The J. Paul Getty Museum has acquired the greatest pastel by Adélaïde Labille-Guiard, one of the leading women artists in 18th-century Europe. The work was purchased at auction at Christie’s in Paris on June 16.

“Portrait of Madame Charles Mitoire with Her Children” (1783) depicts a fashionably dressed woman with her two young sons. Well-known in Parisian art circles, Madame Mitoire was the granddaughter of Carle Vanloo, a famous artist who had been first painter to French King Louis XV. Though its composition echoes traditional representations of the Virgin and Child with Saint John the Baptist, the portrait radically signals the modernity of its subject and her approach to motherhood.

“This work is acknowledged as Adélaïde Labille-Guiard’s finest pastel, which she first exhibited in the Paris Salon of 1783, the year of her admission to the Royal Academy of Paintings and Sculpture,” said Timothy Potts, Maria Hummer-Tuttle and Robert Tuttle Director of the J. Paul Getty Museum. “A remarkable reflection of Enlightenment enthusiasm for natural motherhood (aristocratic mothers at the time had typically used wet nurses), this work constitutes a significant enhancement to the Getty’s representation of women artists and subjects. The display of this work in the salon was also a breakthrough moment for women artists more generally, as the academies had historically been male-dominated institutions. For all these reasons we are thrilled to have this touching and beautiful work in our collection, where I am sure it will become the subject of much attention and be accessible to scholars.”

This work speaks to emerging views of motherhood and familial bonds. A vogue for maternal breastfeeding swept Europe in the late 18th century, spurred by Enlightenment writers like Jean Jacques Rousseau, who decried the common practice of rich parents sending their newborns to wet nurses. Though it was not the first French portrait depicting a well-to-do mother breastfeeding, “Portrait of Madame Charles Mitoire” was quite unlike anything that visitors to the Paris Salon of 1783, where the pastel was first exhibited, had ever seen: a formal portrait of a named sitter openly nursing her child.

“In addition to its exquisite beauty, this new acquisition offers insight into social and intellectual changes unfolding at a key moment in European history,” said Emily Beeny, associate curator of drawings at the Getty Museum. “A transformative addition to the collection, this pastel allows our visitors to explore the tangled relationship between women’s professional ambitions and the emergence of modern domesticity in the period.”

The newly acquired pastel will be put on view for visitors as soon as practicably possible after its arrival in Los Angeles.