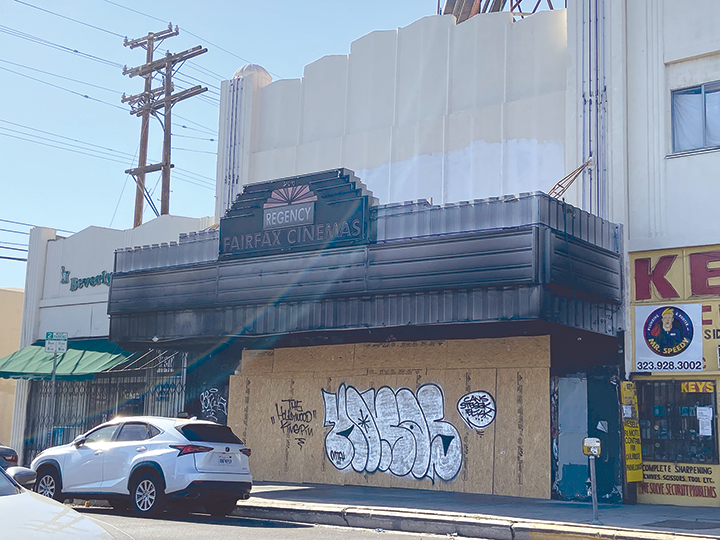 Smoke damage was visible on the front of the theater building on Beverly Boulevard. (photo by Edwin Folven)

A fire on June 25 damaged the façade and marquee of the former Fairfax Theatre building, but it did not snuff out the optimism of preservationists seeking to have the 1932 building on Beverly Boulevard designated as historic.

The former theater building is currently under consideration by the Los Angeles Cultural Heritage Commission for designation as a historic-cultural monument and by state and federal officials for inclusion on the National Registry of Historic Places.

Los Angeles Fire Department spokeswoman Margaret Stewart said the fire erupted at approximately 7 a.m. on June 25 in front of the building. She described it as a minor fire that was extinguished quickly. Firefighters found trash that had ignited and believe the fire was possibly started by an unhoused individual staying under the marquee.

Steven Luftman, a preservationist who filed the application for historic status on behalf of the grassroots group Save Beverly Fairfax and the Art Deco Society of Los Angeles, said the fire was not a setback.

“They had put up a fence under the marquee in the front, and it looks like someone was staying there and may have started a fire. It’s pretty upsetting,” Luftman said. “We are still really excited and are looking forward to July 30, when it will be considered at a National Registry hearing. The process is still ongoing, and we think it is going really well.”

Proponents claim the former theater, located just east of Fairfax Avenue, was at the center of the Jewish community during an important period of growth for the Fairfax District and city of Los Angeles. In addition to movie premieres and theatrical productions, it hosted community meetings, religious services and special events.

The building’s owner, B&F Associates, opposes the historic-cultural monument nomination and is planning to build a 71-unit housing complex at the site. The owner previously received entitlements from the city to build the housing and has until 2024 to begin the project.

The Cultural Heritage Commission voted in May to further explore the possibility of declaring the site a historic-cultural monument. The next step is for a two-member commission committee to tour the site, which will likely occur later this summer.