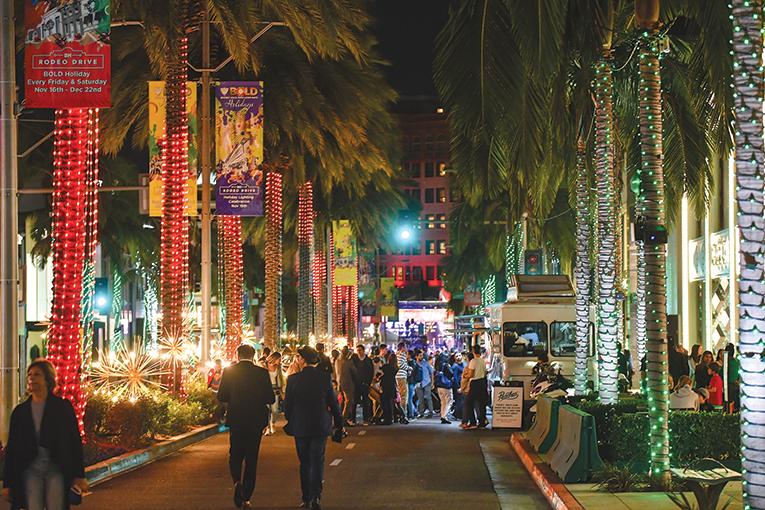 With COVID-19 cases rising and mask mandates reinstated, organizers are unsure how to proceed with events such as BOLD Holidays. (photo courtesy of the city of Beverly Hills)

The city of Beverly Hills suddenly found itself playing a game of “Red Light, Green Light” with its response to the ever-evolving COVID-19 pandemic, as city officials grappled with how to proceed in the face of uncertainty during meetings on July 15.

The Beverly Hills City Council met on the heels of an announcement by the Los Angeles County Department of Public Health that masks are again required in all indoor public places, with some exceptions.

During its study session, the council unanimously approved spending $400,000 on “Holiday Helpers,” the Rodeo Drive Committee 2021 median holiday décor display. However, how the city will celebrate the holidays is up in the air.

Prior to COVID-19, the city had hosted BOLD (Beverly Hills Open Later Days) Holidays, an event that brought Beverly Hills’ streets to life with performances, activities and music. Rodeo Drive Committee President Kathy Gohari said organizers are “unsure” of what they will be able to do this winter.

“We don’t necessarily want to invite 30,000 people [to Beverly Hills] in one night,” she said. “We don’t want to do that, but we want to create some kind of energy so that the merchants feel like they’re not the only ones standing in the store.”

Gohari said, more than in previous years, various brands are reaching out, seeking opportunities to spend marketing dollars on “little installations.” She said the companies are curious about what they can and cannot do.

“Hopefully, we can continue that partnership in the holiday season,” Gohari added.

Chief among the council’s concerns was the number of businesses that would take advantage of the event and stay open late. Councilman Julian Gold said the city looks “foolish” when stores close early during BOLD.

“I hope that’s a big number,” he said. “Obviously, we’re making a significant investment in that. I hope that the folks who were pushing BOLD as a concept recognize that it is a two-way street and they’re prepared to support it, but they have to hold up their end of the deal.”

Gohari said she can’t guarantee that all the stores will be open, but the committee is reaching out to businesses and their corporate offices about the event.

During its regular meeting, the council had planned to revise — or at least discuss — its urgency ordinance at the request of staff. It had previously removed social distancing requirements, a prohibition on internet fee increases and a suspension of non-recyclable bag regulations, among other things, at its meeting on June 24.

“Is it prudent to move forward with a repeal with that uncertainty? That’s the question we should be asking ourselves,” Councilman John Mirisch said.

Staff had requested that the city resume penalties and interest on business taxes and lift restrictions on third party delivery service fees on Sept. 25, while repealing the relaxation of non-conforming signs and removing the city manager’s authority to close streets on Aug. 26.

Councilman Mirisch noted that the agenda was put together prior to the county announcement, which certainly changed the direction the city was headed. Mayor Robert Wunderlich agreed.

“Tonight does not seem to be the night to repeal the things we put into place to help our businesses,” he added.

The council unanimously voted to continue any further discussions on repealing the city’s emergency regulations until a later, unspecified date.