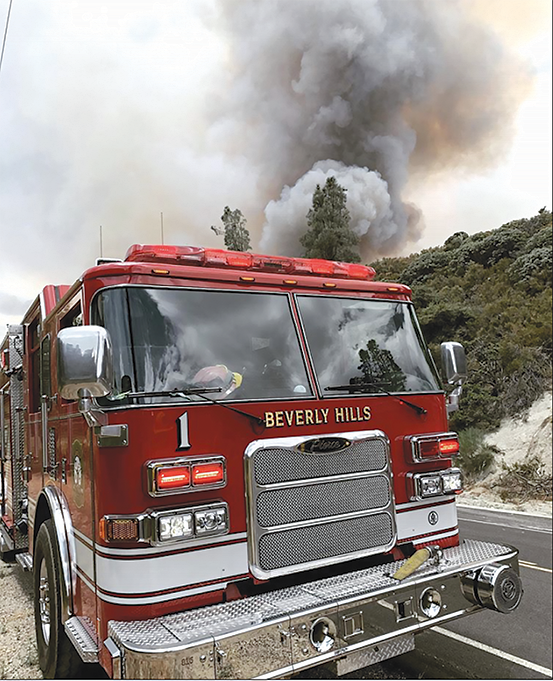 The Beverly Hills Fire Department has agreements in place to bring resources from other agencies when wildfires occur. (photo courtesy of the BHFD)

Emphasizing that it’s a matter of when, not if, a brush fire is going to occur in the mountainous neighborhoods north of Sunset Boulevard, the Beverly Hills City Council reviewed the fire department’s 2021 Wildfire Assessment Report on July 27 and considered steps that can be taken to reduce risks.

The council heard from Beverly Hills Fire Department Chief Greg Barton and representatives from the consulting company Wildfire Defense Works, that created the report. It analyzed the propensity of wildfires and locations where they may occur in Beverly Hills, as well as evacuation routes and the ability to get fire department personnel up steep mountainous roads. It also examined the effect of the urban canopy and how trees contribute to wildfire risk, and measures that can be taken to mitigate future wildfire disasters.

The council commended Barton and the consulting team for the comprehensive report and said it will serve as a guide as future plans are formulated. Mayor Bob Wunderlich and Vice Mayor Lili Bosse said there is an urgency to address risks and stressed that the fire department should continue with measures already underway.

Those measures include having a full-time inspector assigned to the neighborhoods north of Sunset Boulevard who educates residents and works with them to ensure brush is cleared. Barton said the inspector has already met with approximately one-quarter to one-third of the residents of the estimated 1,640 parcels in the neighborhoods north of Sunset Boulevard, and the effort will continue year-round.

The fire chief also said he is planning evacuation drills – both virtually and in-person – to better prepare residents for emergencies. He also cited red flag warning days, when parking on streets in the hills is restricted during windy days and periods when wildfire risk is heightened, allowing more access for fire trucks. The BHFD has agreements with the city of Los Angeles and Los Angeles County fire departments that activate additional resources, including water-dropping helicopters, if a fire erupts in the hills, he said.

“What we’ve been doing is increasing our automatic aid agreement with the city of Los Angeles … for us to give resources and get resources. We’re sending everything we can to knock [a brush fire] out and keep it as small as possible, as quickly as possible,” Barton said.

The Wildfire Assessment Report recommends the removal of approximately 100 trees, which Barton said are city-owned trees mostly located along evacuation routes. Many are pine trees that can ignite quickly and spread flames through their canopies, he said. Barton and the consultants acknowledged that removing the 100 trees would only reduce risk scenarios by approximately 20%, but they said it is a good first step to ensure the evacuation routes are more protected and remain accessible during wildfires.

The council did not take action on tree removal, but said the city should continue to analyze risk and expeditiously address immediate problems, and also work toward creating a further plan of action for the future.

Wunderlich stressed that the primary concerns are making sure evacuation routes are clear, removing trees that can contribute to fire spread and working more closely with private property owners to ensure they are doing everything possible to keep brush and vegetation clear.

Bosse stressed the need to act swiftly and pressed Barton to hold a virtual wildfire drill with residents. Barton said he could do that in the next two months and then hold an actual evacuation drill around the first of next year.

“Sounds great, I’d like to move that up,” Bosse added.

Councilmen Julian Gold, John Mirisch and Lester Friedman praised the thoroughness of the report, but said it raised questions and concerns.

“I really do believe this is a call to action,” Gold said. “I think we recognize there is a risk, a growing risk. It’s not something we can ignore. It’s something that we have dealt with, but it’s something now that we need to [address] with a greater sense of urgency.”

Mirisch said he supports more inspections and efforts to educate and work more closely with residents. He also cautioned about being too hasty in removing too many trees. Mirisch said he thinks more consideration should be given to the effects of climate change and drought and the detrimental effects tree removal may have on the community.

Friedman said he believes the report is a good guide for taking short-term and long-term action.

“Whether or not less than 100 trees are necessary to be removed, I think that only time will tell. I think that right now, that is a good first step. Whatever we can do to reduce the risk is important,” Friedman added.

Barton said the immediate plan will be to identify exactly which trees will be removed. The fire department will work with the city arborist to eliminate trees that allow embers and flames to quickly spread across leaf canopies. The chief also credited the work the fire inspector is conducting with residents as making a difference in helping people prepare.

“A lot of collaboration has been going on with neighbors for the last year-and-a-half,” Barton added. “This work will continue. We are confident we can continue to reduce the risks.”