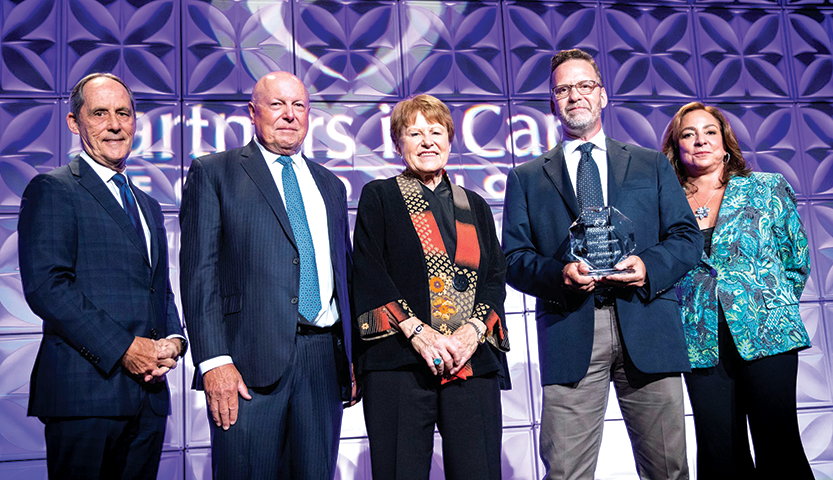 Children’s Hospital Los Angeles President and CEO Paul Viviano was honored on June 21 by the Partners in Care Foundation with its Vision and Excellence in Healthcare Leadership award.

He was the 21st recipient of the annual award, which he received at a dinner celebration held at the Beverly Hilton Hotel before an audience of 400 health care executives from throughout the state, in addition to another 125 participating virtually via Zoom.

The Partners in Care Foundation also honored Dr. Paul Torrens, professor emeritus of health policy and management and founder of the Paul Torrens Health Forum at UCLA. He received Partners’ Lifetime Achievement Award – only the second time in the agency’s history that the award was given to an individual. Torrens’ son, James, accepted the award on his behalf, as he was unable to attend.

“The two men we honored are such significant individuals who have each had a major impact on the development and provision of health care services in California, the United States and internationally as well,” June Simmons, Partners’ president and CEO, said. “Paul Viviano’s career and work with Children’s Hospital Los Angeles exemplifies both vision and leadership. He has applied wonderful imagination, experience and talent while simultaneously serving as a tenacious agent of change. California’s children and its families are fortunate that Paul’s commitment is focused on helping them get through the trying times so many face.”

Viviano is recognized as both a major health care leader and prominent advocate of child health. For more than three decades, he has directed academic, nonprofit and for-profit health care organizations delivering excellence in clinical care. He joined Children’s Hospital Los Angeles as president and CEO in 2015 and serves as a member of its board of directors and board of trustees.

Torrens has guided, mentored and advised generations of students, helping many shape careers in public health. A physician by training, he has enjoyed a long career in both health care management and policy development. As a health care executive, Torrens held numerous executive positions in hospitals and health care organizations and served on the governing boards of Blue Shield of California and PacifiCare Behavioral Health of California.

The Partners in Care Foundation mission is to align social care and health care to address the social determinants of health and equity disparities affecting vulnerable populations.