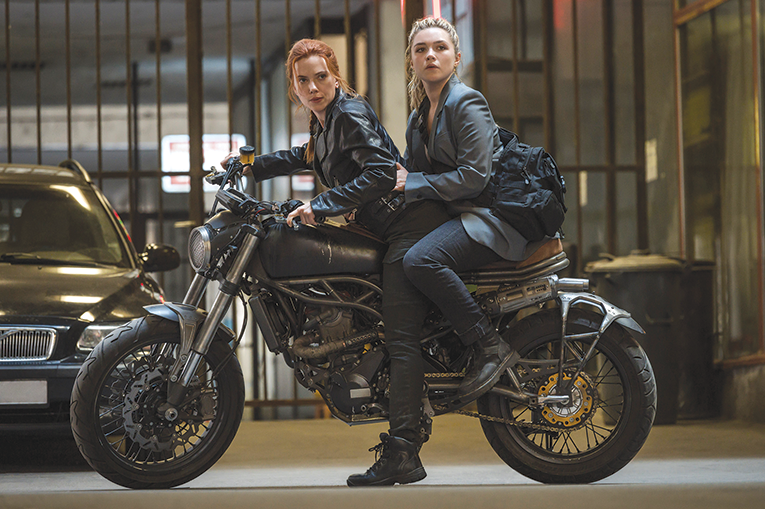 Get used to the term legacy. For the Marvel Cinematic Universe to outlive the original A-listers’ expiring contracts, this is the way.

Comics fans know the term well: it’s the process of passing a superhero identity – legacy – onto a new character. While “Black Widow” delivers a splendid film all about a titular character introduced in 2010, it also introduces the next spy who will pepper various Marvel stories in the following years.

Set several years prior to that, “Black Widow” focuses on the former Russian spy’s adventures after “Captain America: Civil War,” once the Avengers splintered, sending several on the run from government.

The former spy turned S.H.I.E.L.D. agent turned Avenger turned fugitive hopes to spend her days in an RV alone, but that doesn’t last long once she receives a package whose contents attract a mysterious foe, the masked Taskmaster (no spoilers on the identity here). This baddie can mimic the fighting styles of most mortal Avengers, with a shield, bow and claws to boot. Nothing adds insult to isolation quite like an evil doppelganger doing impressions of your friends.

While “Black Widow” isn’t a traditional origin story, it provides key moments from Natasha’s past, like a three-year mission in an American family with a sister and parents (she was kidnapped and forced into the Widow program at a very young age).

Getting the family back together to understand the mysterious McGuffin she has, Natasha locates surrogate sis Yelena Belova (Florence Pugh), who informs her the Red Room is not as defunct as she thought. To take on this nefarious organization and its leader Dreykov (Ray Winstone), our leading Black Widows – technically, former Widows – need help and answers. That brings them back in contact with faux father Alexia (David Harbour), once called the Red Guardian in his heyday as a superhero with Cap-like powers, and mother Melina (Rachel Weisz), whose allegiances are a touch more complicated.

Marvel expertly handled Captain America, especially in solo films, creatively exploring his combat abilities across various hand-tohand fight sequences. “Black Widow” includes that magic. More than any other MCU entry, this one builds on that tone, particularly the espionage elements that worked to sell it.

“Widow” is no carbon copy. Tonally, it actually breaks the Marvel formula in minor ways. Even the third act downplays its most excessive elements in service of thematic emphasis. But make no mistake, the major action sequences work remarkably well.

Johansson does a serviceable job, presenting a more complex character than the oft-confident, rarely vulnerable Avengers teammate. But the breakout performance belongs to Pugh. She receives some of the best lines and serves as the source of hope in the story.

For anyone unfamiliar with the history of Black Widow on screen, this film is years too late. The promise of a solo romp was dangled for some time, but it never came together. Instead, new characters kept popping up, moving her story to the background. “Captain Marvel” then arrived, beating Widow to that big-screen debut.

It’s hard not to watch this film with that lens, a bit frustrating that it took so long and any promise of a sequel will come without key players or won’t arrive for some time. Without spoiling much, this flick ties directly into a forthcoming Disney+ original series, and Marvel Studios seems perfectly fine with character jumping between films and those series, so who knows what will be next for all the openended moments on display here.

In the meantime, “Black Widow” is a wonderful love letter to Johansson and Widow fans that will hopefully be more than a one-off.