Bike lanes may roll out on Roxbury Drive 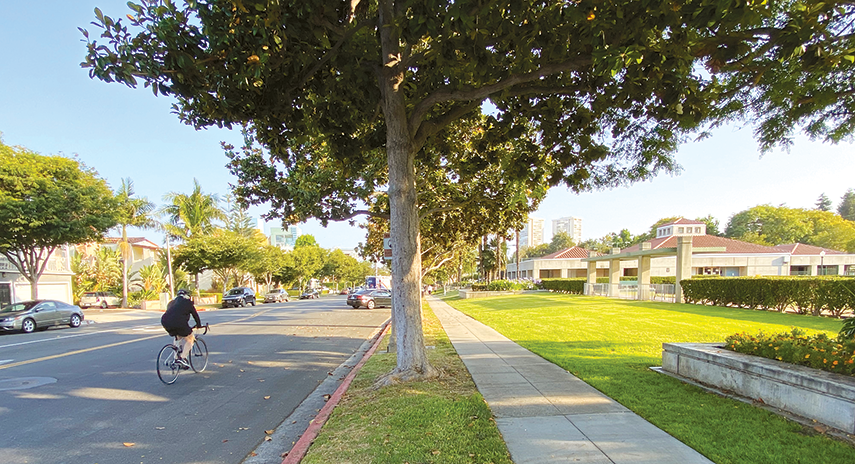 The city of Beverly Hills will host a bike lane demonstration on Roxbury Drive on Sunday, July 25. (photo by Edwin Folven)

The city of Beverly Hills will host a demonstration event from 10 a.m. to 4 p.m. on July 25 to determine whether bike lanes are feasible and desired along Roxbury Drive, south of Olympic Boulevard.

The event will be the first step in potentially developing a one-year pilot project on Roxbury Drive that would create the first protected bike lane in Beverly Hills, Mayor Robert Wunderlich said.

“It is [significant]. I think it’s a symbol of what we’re going to incorporate into our thinking going forward,” he said, adding that the historic city is “fully built out” and needs to “accept” multiple modes of transportation.

Wunderlich referenced the Beverly Hills City Council’s efforts to improve mobility via the One Beverly Hills project. He said an existing bike lane on Santa Monica Boulevard will be improved, as will nearby intersections.

“I hope that will [increasingly] be part of our thinking going forward,” Wunderlich added.

According to a staff report, the Roxbury Drive “high priority bikeway project” is the first the city has pursued since the City Council adopted its Complete Streets Plan, which seeks to improve mobility for all residents, in April.

Wunderlich said the Roxbury Drive project would be conveniently located next to Roxbury Park and could connect to existing city of Los Angeles bike lanes, allowing residents to bike from Olympic Boulevard to the Expo Line’s Culver City Station.

“The entire route is not an entire bicycle lane,” he admitted, adding that the ride on the Los Angeles bike lanes is comfortable enough. “I’ve ridden it on my bicycle. I know what it’s like.”

During the July 25 event, staff members will use temporary markings, signs and planters to show what the bike lane would look like and allow cyclists to try it. Wunderlich said bikes will be provided to residents if needed. Community members are encouraged to provide feedback. Wunderlich will lead a community bike ride along a two-mile course in the area at 10:30 a.m.

“People can also take advantage of that loop during the entire time period … the demonstration is in effect,” he added.

After the demonstration, city staff will analyze its data, as well as information provided by residents, and bring a one-year pilot proposal to the City Council. According to the staff report, no parking spaces will be removed if developed.

Wunderlich said the project has some opposition, although, according to staff, no one attended the city’s virtual meeting about the demonstration on June 22. The mayor said it can be difficult to make such changes in a city that is already built out.

“There’s only a certain amount of physical space,” Wunderlich said. “Sometimes, people are worried about what will happen to their businesses if parking spaces are lost or if it were to happen in a residential area.”

Wunderlich said that is the point of the pilot projects: to let the community experience the idea and determine whether it works.

Along those lines, the city plans to remove a demonstration project that added decorative curb extensions, planters, public seating and bike rack corrals at Camden Drive and Brighton Way.

Also part of the Complete Streets Plan, the $169,000 demonstration was funded primarily by a Southern California Association of Governments grant. The city’s Traffic and Parking Commission considered the demonstration a success, according to staff, but unanimously voted to remove it due to several factors, such as costs, maintenance and potential interference with future projects.

“That particular implementation didn’t work out quite as well as we had hoped,” Wunderlich said. “That’s an example of the kind of things that we want to try.”

He added that the city of Beverly Hills is already pedestrian friendly.

“We want to make it even more so.”