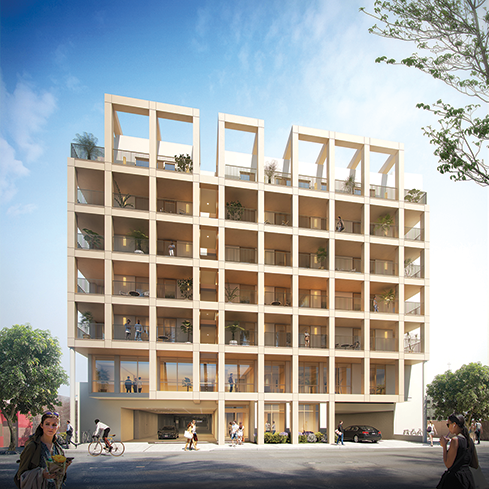 The Hollywood Arts Collective includes more than 150 units of affordable housing for artists. (rendering courtesy of the Actors Fund)

Progress continues on an affordable housing development for artists in Hollywood.

The Hollywood Arts Collective, located on the south side of Hollywood Boulevard between Wilcox Avenue and Schrader Boulevard, will include 151 units – all affordable and set aside for households making 60% of the area median income or below – as well as art-centric amenities like galleries, rehearsal space and a theater. The $120 million project from the Actors Fund and affordable housing developer Thomas Safran and Associates will house the headquarters for the Actors Fund Western Region.

The arts building opens onto Hollywood Boulevard, which Los Angeles City Councilman Mitch O’Farrell, 13th District, said makes it “a perfect fit for the Heart of Hollywood” initiative, the councilman’s plan to renovate the Hollywood Walk of Fame. O’Farrell added that “my team and I have worked tirelessly to bring [the Hollywood Arts Collective] to fruition.”

“The rehabilitation and expansion of the arts and cultural spaces directly on Hollywood Boulevard will perfectly complement the 150 units of 100% covenanted affordable housing targeted for artists and those that appreciate the arts,” O’Farrell said in an email.

A representative for Thomas Safran and Associates was not available for an interview before press time.

Live entertainment silenced in OUT Zones