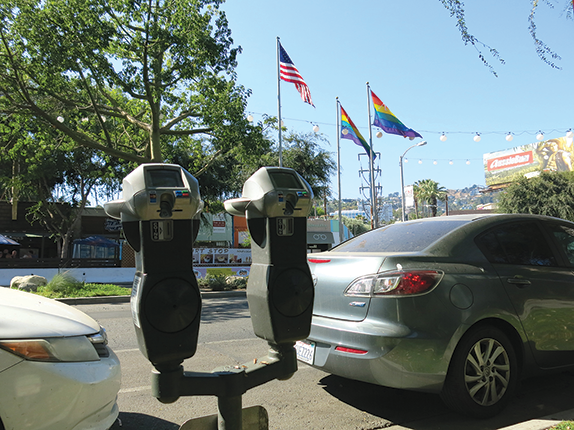 Parking meter revenues are expected to increase in West Hollywood in the coming fiscal year. (photo by Cameron Kiszla)

The West Hollywood City Council voted 3-1 on Monday to approve its fiscal year 2021-22 budget amidst concerns about the city’s contract with the Los Angeles County Sheriff’s Department and how a proposed hotel ordinance could affect city revenues.

However, city officials expressed cautious optimism when discussing West Hollywood’s financial future. City Manager Paul Arevalo, who retires on July 7, said the impacts of COVID are still being felt, but he feels a rebound is on the way.

“That being said, we’ve put together a relatively conservative budget. …We’re waiting for the economy to come back,” he said.

Incoming city manager David Wilson said the 2021-22 budget is focused on revenue recovery and expenditure restraint, as the city is likely a year or two away from pre-pandemic revenues.

“This is predominantly a status-quo budget [that continues] to implement many of the cost-saving measures in the fiscal year 2021 budget,” he said.

Budget officer Christine Safriet said the city is projecting the general fund to grow $25 million during the fiscal year, thanks to an uptick in travel and the recovery of the entertainment industry.

“In particular, we are expecting a substantial increase in our hotel tax revenues this year,” she said, adding that the city expects them to grow by $11 million to $18 million. For context, pre-pandemic hotel tax revenues were roughly $26 million. “We still have a ways to go in terms of recovery.”

Safriet referenced the voter-approved Measure E sales tax, which is projected to add $10 million to the city’s general fund. She also stated that property tax revenues are projected to remain strong, while parking meter revenues are expected to increase.

She said expenditures for the 2022 budget are expected to increase by $16 million compared to the adjusted 2021 budget – in part due to costs associated with the renovation of West Hollywood Park.

“It is larger than our two other major facilities (City Hall and Plummer Park) combined,” Safriet said.

The 2021-22 budget proposal also suggested an increase of roughly $2 million for public safety. Safriet said that included contractual increases with the Los Angeles County Sheriff’s Department for liability costs and cost-of-living adjustments. It also included funding for event safety and a second Mental Health Evaluation Team, as well as $150,000 for the council to spend toward community safety, she said.

Residents also spoke for and against the city’s proposed hotel ordinance, which offers hotel workers new protections. Wilson, the incoming city manager, said the budget does not include any ordinance impacts, as it has not been approved. The city, however, could adjust the budget if the ordinance passes, he said.

“It will be hard to staff events in July and August,” Wilson said, adding that events during those months are still budgeted and will be held virtually, with the exception of National Night Out. “I don’t expect that we would be back to full, in-person events until some time in September.”

Mayor Lindsey Horvath said the city should rethink how it hosts special events, especially Pride, after Public Safety Director Kristin Cook said the majority of the funding used toward Pride is for medical calls – sometimes due to participants over-indulging.

“I think that conversation definitely needs to be had,” Horvath said.

Mayor Pro Tempore Lauren Meister expressed concerns about the city dipping into its reserves. She requested that the council wait to decide on the community safety element of the budget until the study is released and for the council to study the possible impacts of its hotel ordinance.

In the end, the council voted to approve the budget while tabling a vote on increases to community safety, the Mental Health Evaluation Teams and major events. Meister was the lone dissenting vote.