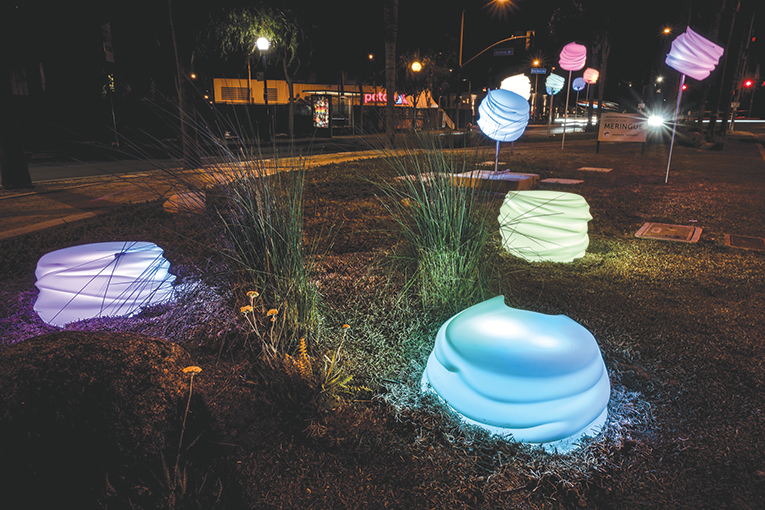 The artist intends “Meringue” to feel like a portal to travel without moving, in that viewers travel when they come in contact with it not physically, but in the imagination. The translucency of “Meringue” lets sunlight in to glow naturally during the daytime. At night, it transforms into various light combinations. The artworks are made of high-density polyethylene and illuminated with energy-efficient LEDs.

“Meringue’s” lighting is changeable, and will display various colors in association with major city events or celebrations. Through June 30, “Meringue” will be illuminated in rainbow colors in celebration of LGBTQ pride, as part of the city’s One City One Pride LGBTQ Arts Festival.

The installation is located within the city’s ocean-friendly garden in the traffic median. Plants in the area were designed in collaboration with the West Basin Water District using ecological principles and water conservation. The California native plants are drought-tolerant and illustrate environmentally-sound practices.

Kim explores the spectrums between art and architecture using digital fabrication, as well as man-made and natural materials, to create virtual and real representations of geometric experimentations. First prize winner of a Baku International Architecture Award and recipient of the Next Generation Design Leader award by the Korean Ministry of Trade, Industry and Energy, the artist’s work has been showcased internationally.

“Meringue” is a part of the city’s Art on the Outside project, which features temporary artworks on medians and in parks. It is anticipated to be on display through July 2022. For information, visit weho.org/arts.