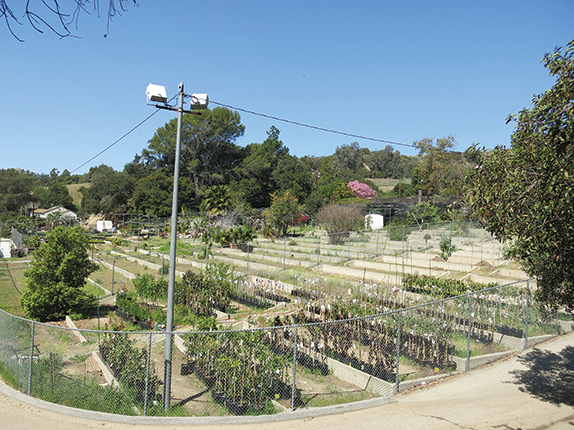 Commonwealth Nursery in Griffith Park produced more than 1 million plants and trees annually for L.A. at its height. (photo by Cameron Kiszla)

The City Plants / LA City “team trees” collaboration has been selected as a finalist in the MyLA2050 Grants Challenge and is in the running to receive up to $100,000 to make Los Angeles. the “best place to live” in support of the collaborative efforts at the Commonwealth Nursery.

The Commonwealth Nursery is a historic city tree and plant nursery in Griffith Park. At the height of its production in the 1930s, it provided over 1 million plants and trees annually for city projects, but it has been largely unused as a nursery space since the 1970s. Commonwealth Nursery is now the subject of a unique partnership that includes City Plants, the Department of Water and Power, Los Angeles Department of Recreation and Parks Department, L.A. Parks Foundation, Los Angeles Conservation Corps, the L.A. Department of Public Works and others who are working together in an attempt to revive this hidden gem.

This project, “From Little Seeds Grow Mighty Trees,” would establish the site as a tree nursery once again to provide more resilience for the city’s urban forest, including seeds for future trees and plants on public and private land throughout Los Angeles.

RAP has a 10-week training course for new staff to their Maintenance and Operation division, which are good-paying green jobs with growth potential for the future. Along with RAP, LACC has a nursery manager and corps members that are currently maintaining the small nursery space. Funding from the LA2050 grant would help City Plants develop the curriculum and add to the number of corps members trained as well as support the budding tree nursery with core infrastructure.

“Gaining the resources to reinvigorate the Commonwealth Nursery would not only be great for urban cooling in our city, but it would also allow us to use this unique site to further city goals for job development and equal access to job opportunities in a green growth industry like urban forestry,” added Rachel O’Leary, program director for CityPlants.