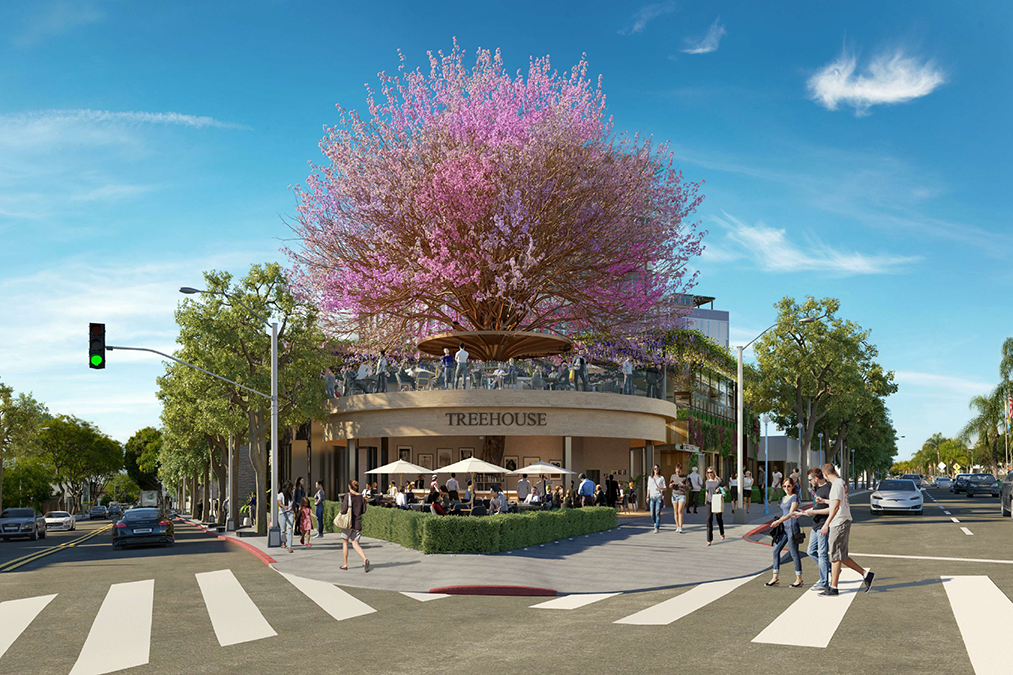 The Treehouse will house a nightclub and restaurants in a two-story building. (rendering courtesy of Faring)

A West Hollywood-based developer has proposed some housekeeping at its already-approved Robertson Lane hotel project.

The developer, Faring, originally sought to build a mixed-use project that included 241 hotel rooms with allocated space for retail, a nightclub and restaurants. The West Hollywood City Council approved the project in 2018, and the city approved additional alterations in 2019.

“Design updates to the approved Robertson Lane project are the result of careful planning and close collaboration with the West Hollywood neighbors, city officials and the historic preservation community,” Stevens said.

He said two parcels, the former Hamburger Haven and Bossa Nova locations, will be added to “The Treehouse,” a 39,500-square-foot building that will integrate a sculptural tree with lights that reach up to 65 feet in height. Faring is looking to house a nightclub and restaurants in the two-story building.

“The addition of the former Hamburger Haven and Bossa Nova … will ultimately transform a trophy corner at the west end of WeHo’s entertainment district,” Stevens said.

He added that there will be no changes to parking, nor will there be adjustments to the effort to preserve the Factory building, which was once home to the popular Studio One nightclub.

Faring recently presented its changes to the West Hollywood West Residents Association. The association’s vice president, Manny Rodriguez, said its members have not taken a position on the proposed changes thus far. 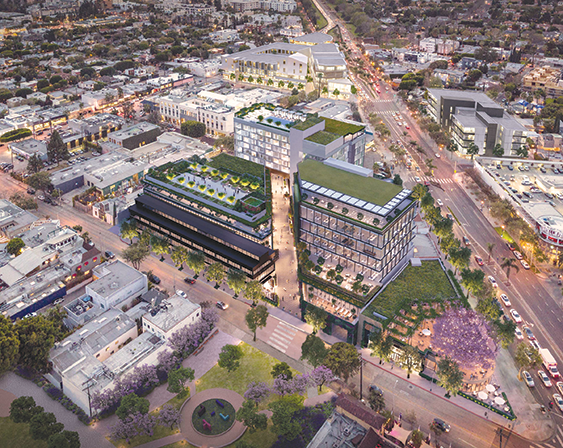 The Robertson Lane project was initally approved by the West Hollywood City Council in 2018. (rendering courtesy of Faring)

Rodriguez said the project is located far enough away from the residential neighborhoods of West Hollywood West and the Norma Triangle, and that the area would be a good fit for a hotel. He also noted that parking would remain the same, “which is good.”

Bobbie Edrick, captain of the Norma Triangle Neighborhood Watch, said the neighborhood has been looking forward to the project since it was approved in 2018. She feels that the development will spruce up the neighborhood.

“We wish it would begin already,” Edrick said, adding that she is also pleased with the proposed changes to the project. “I thought it was better than it was before. …They have a lot to offer.”

Victor Omelczenko, board president for the West Hollywood Preservation Alliance, also expressed optimism about the project.

“The Factory’s unique modular components are now in storage, and the West Hollywood Preservation Alliance looks forward to the day that this historic building is reassembled and adaptively reused as part of the new Robertson Lane project,” Omelczenko said in a statement. “The state of California has previously recognized the importance of this building, and we’re eager to see it designated as a local West Hollywood cultural resource in the future.”

Jennifer Alkire, West Hollywood’s current and historic preservation manager, said the project changes were introduced at the beginning of the year, and that the West Hollywood City Council will hear an update on the project at its June 7 meeting. She said the council is scheduled to vote on the alterations later this year. City staff have not made a recommendation on the proposed changes.

“We’re doing our analysis, and we’ll come back with a recommendation later in the year,” Alkire said.

Some work is already underway at the site. Alkire confirmed the Factory building has already been dismantled and is ready to be repositioned once the development is constructed.