Rainbow halos pay tribute to tragedies on the road 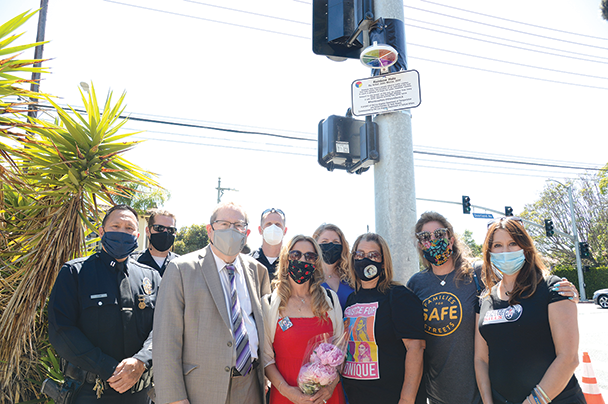 The Los Angeles Department of Transportation and the nonprofits Los Angeles Walks and Southern California Families for Safe Streets installed a rainbow halo on June 12 on a traffic signal at Olympic Boulevard and Overland Avenue in tribute to Monique Munoz, a 32-year-old woman who was killed on Feb. 17 when her car was struck by another vehicle. Police said that vehicle, a Lamborghini SUV, was traveling over 100 mph.

Rainbow halos were created by artist John Morse to honor victims who have lost their lives in traffic collisions. The multi-colored, transparent disc-shaped devices project a rainbow of colors on the ground when sunlight shines through them. The rainbow halo installed for Munoz was the 15th citywide and the first in the local area. The first rainbow halo was installed on Woodman Avenue near Addison Street in the San Fernando Valley in tribute to Notre Dame High School student Conor Lynch, who was struck and killed by a vehicle in 2010.

John Yi, executive director of Los Angeles Walks, said the rainbow halos honor victims and raise awareness about the dangers of reckless and distracted driving. Southern California Families for Safe Streets, which is part of Los Angeles Walks, has partnered with the LADOT to install the halos at the sites of fatal vehicle collisions.

“The rainbow halos are a memorial project. We are also trying to raise awareness about traffic deaths, why a crash happened,” Yi said. “We try to leverage the installation as a public education campaign. That is continually important.”

The rainbow halo for Munoz was unveiled at a ceremony at the intersection attended by the victim’s family and friends, LADOT representatives, members of the nonprofits and other advocates for traffic safety. Los Angeles County Councilman Paul Koretz, 5th District, said it is important both to honor victims and ensure that such tragedies lead to positive change.

“I continue to join the community in mourning the shocking and senseless death of Monique Munoz, whose life was abruptly taken while driving home from work, a victim of a horrible car accident in my district,” Koretz said. “By all accounts, she was a vibrant young soul who was the joy of all who were around her. May this halo serve as hallowed ground to both mourn her life that was cut way too short, and also serve to remind drivers that there are very real consequences for street racing and careless driving.”

The driver who struck Munoz was 17 years old. The teen, who has been widely identified in media reports as Brendan Khuri, was also injured in the collision but survived. The Los Angeles County District Attorney’s Office declined to identify the defendant by name because he is a minor and prosecution is occurring in juvenile court. The defendant admitted to vehicular manslaughter in April and was placed on house arrest, D.A.’s office spokesman Greg Risling said. The teen is expected to return on June 30 for a disposition hearing, which in juvenile court refers to sentencing.

Advocates for traffic safety praised the rainbow halos as fitting tributes for crash victims, but added that more needs to be done. Lynch’s mother, Jeri Dye Lynch, who founded the nonprofit Conor Lynch Foundation after her son’s death, said too many families have faced tragedy because of drivers’ failure to observe the rules of the road.

“There’s no such thing as an accident; everything can be avoided,” Lynch said. “Here we are 11 years later (after her son’s death), and it seems like we have gone in the opposite direction. Traffic and speeding has only gotten worse throughout the pandemic – everywhere. It’s discouraging that we haven’t done enough.” 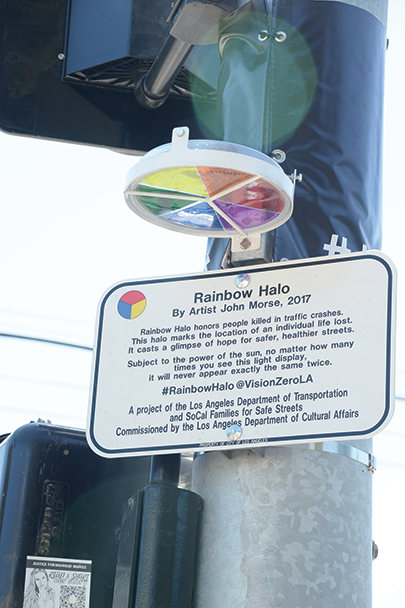 A rainbow halo, which projects rainbow colors when sunlight shines through it, was installed on a traffic signal at Olympic Boulevard and Overland Avenue to commemorate a 32-year-old woman who was killed in a collision in February. (photo courtesy of Councilman Paul Koretz’s office)

Lili Trujillo, whose 16-year-old daughter Valentina was killed in 2014 when a young man who was street racing crashed while giving her a ride home, founded the nonprofit Street Racing Kills. Trujillo attended the rainbow halo unveiling for Munoz and said it is important to emphasize the message to teenagers that driving is dangerous and can result in injuries and fatalities.

“Teenagers need to know that speeding and distracted driving kills,” Trujillo added. “We are living in the city of the fast and the furious. This is real, and this is going to keep happening. What happened to Monique, it really touched my heart, so I wanted to do something. We are sending the message that texting while driving and speeding and street racing can have tragic results.”

Yi said that Los Angeles Walks and Southern California Families for Safe Streets partner with organizations such as the Conor Lynch Foundation and Street Racing Kills to provide resources and support.

In April, Koretz expedited the installation of a new signal with a dedicated left turn arrow at the intersection where Munoz was killed, and a plaque explaining the significance of the rainbow halos has also been fastened to the pole. The councilman supports tougher laws to address speeding and street racing, including reducing speed limits on some streets, his spokeswoman Alison Simard said. Assembly Bill 3, authored by Assemblyman Vince Fong (R-Kern County), will increase criminal penalties for street racing and exhibition of speed. Assembly Bill 43, authored by Assemblywoman Laura Friedman (D-Glendale), will give city governments greater control over setting speed limits, which are currently established by the state. Both bills are pending in the state Legislature.

LAODT spokesman Colin Sweeney said the department supports AB 43 and greater control over speed limits. He said the LADOT works with Southern California Families for Safe Streets to identify families who may wish to have a rainbow halo installed for a lost loved one.

Lynch added that it is important to change laws to make roadways safer, and reiterated the message that safety is the individual responsibility of every driver.

“Safety has to be the No. 1 priority,” she said. “The biggest thing is prevention.”

Approximately 100 rainbow halos have already been created and plans call for them to be installed citywide. For information on commemorating a victim, email socalsafestreets@losangeleswalks.org.