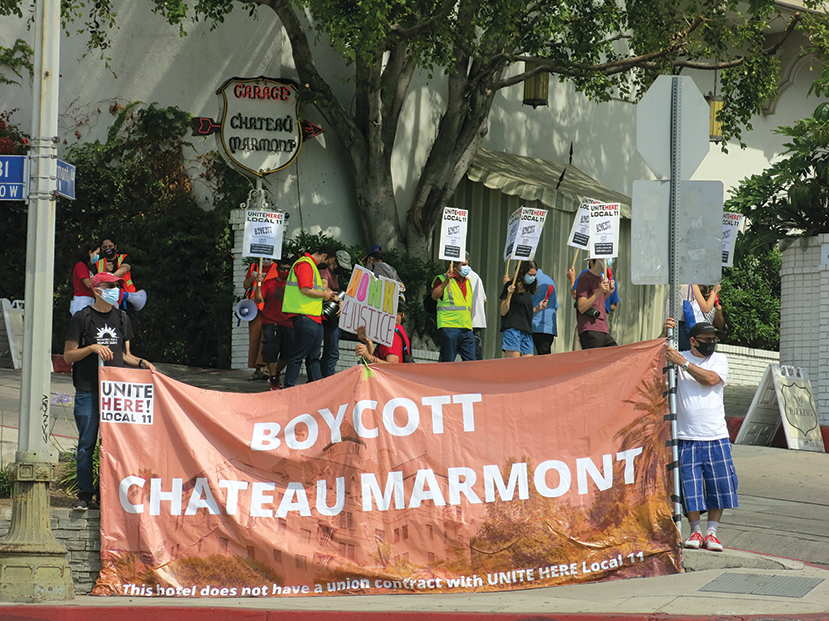 Unite Here Local 11 and CLUE led protests outside the Chateau Marmont, requesting a return to work for the employees who were laid off due to the pandemic. (photo by Cameron Kiszla)

Approximately 50 protesters from Unite Here Local 11 and Clergy and Laity United for Economic Justice, or CLUE, protested outside the Chateau Marmont on June 15, seeking a return to work for scores of workers who were laid off due to the pandemic.

According to Unite Here Local 11, more than 200 workers were laid off when the pandemic shutdowns began last year, and the vast majority of them have not been rehired.

Some laid-off workers were present at the protest, noting their desire to return to their jobs. Teoflio Romero, who worked in the hotel’s cafeteria for six years, said “it’s been very hard for me” since he was let go due to the pandemic.

“I want to come back, but I don’t think it’s going to happen,” he said.

The protesters chanted “bring them back” and “when can they come back to work?,” marched up the driveway and attempted to speak with hotel management, but after a few minutes, they were asked to leave the property.

The Rev. Gary Bernard Williams, pastor of Saint Mark United Methodist Church, said he wasn’t surprised they were unable to meet with hotel management. The hotel used COVID-19 protocols as a pretense for removing the protesters from the property, he said.

“They pretended they were being fair,” he said.

To bolster its claims that the workers should be hired back, the protesters claimed that the hotel took out a Paycheck Protection Program loan to save 151 jobs and that the hotel is refusing to rehire its laid-off workers, as it should do to comply with local and state right-to-return laws.

Rabbi Neil Comess-Daniels, rabbi emeritus of Beth Shir Shalom, said that despite claims from hotel security that the protesters were refusing to abide by social-distancing guidelines and were subsequently trespassing after being asked to leave, the hotel management was breaking the law by refusing to rehire their workers.

“They’re the illegal ones here,” he said. 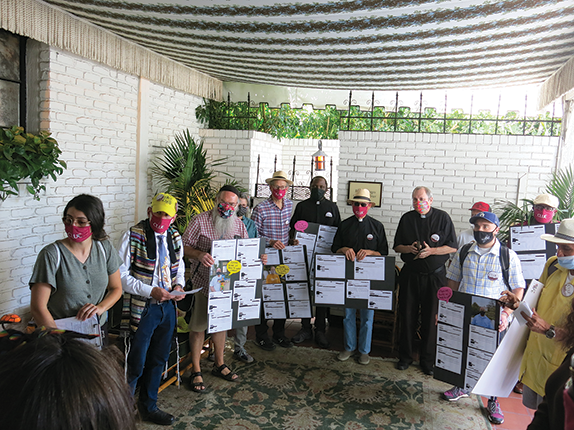 Hotel security did not allow protesters inside the building. (photo by Cameron Kiszla)

A spokesperson for the Chateau Marmont, who declined to be named, noted in a statement that the PPP loan the hotel took out in 2020 was received and “returned in full within 48 hours because business conditions prevented the hotel from appropriately using the funds according to the spirit and the specific guidelines of the program.”

“The Chateau Marmont applied for and received a PPP loan in 2021 of $1.95 million (less than the amount that could have been requested) and is complying with all federal laws and regulations regarding the proper uses of the loan,” the spokesperson said. “Some of the funds that have been used include payroll for the 19 former employees who have been hired back by tenure in accordance with the right-to-recall ordinance.

With no resolution reached on June 15 and many former Chateau Marmont employees still without a job, more action is likely forthcoming, said Michelle Seyler, executive director of CLUE, who added that she wasn’t surprised they were unable to have a productive meeting with hotel management.

“I anticipate we’ll need to come back,” she said.