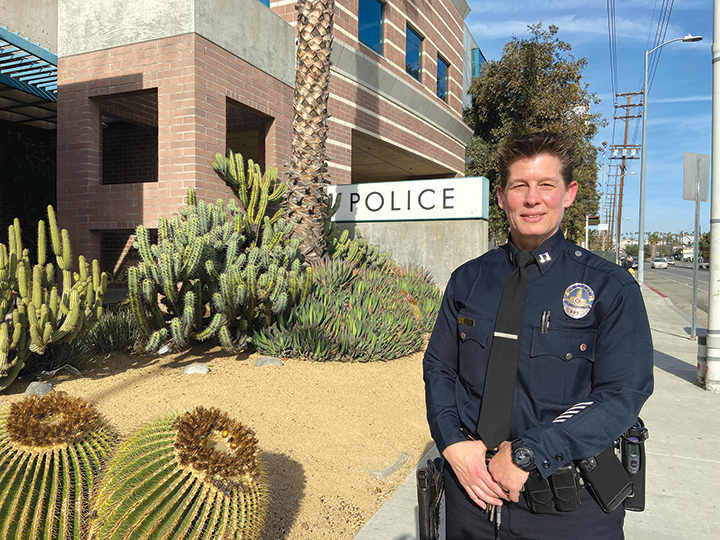 Capt. Shannon Paulson, commanding officer of the Wilshire Division since early 2020, will be leaving to serve in the LAPD’s Counter-Terrorism and Special Operations Bureau. (photo by Edwin Folven)

Capt. Shannon Paulson, commanding officer of the Los Angeles Police Department’s Wilshire Division, attended a virtual meeting on crime held by the Melrose Action Neighborhood Watch on May 26 and outlined steps being taken to address crime in the community.

Four days later, Paulson announced that she will be promoted to the rank of commander and will be leaving the Wilshire Division soon to take a position as assistant commanding officer of the LAPD’s Counter-Terrorism and Special Operations Bureau. The transition date has not been scheduled, but Paulson said it will likely be in July or August. A replacement for the captain has not been named.

“I assure you, I am in no hurry and will make the most of my time left here at Wilshire,” Paulson said in a statement. “There are still things I hope to accomplish and I will be working hard right up to the very last day.”

The news was met with trepidation by some in the neighborhood. Melrose Action Neighborhood Watch co-founder Peter Nichols said he was glad to see Paulson move up in the ranks but is worried about how a change in command will affect the community. The captain has been assigned to the Wilshire Division since early 2020.

“I’m not surprised [about the promotion]. Captain Paulson has been a trailblazer in her community relations efforts,” Nichols said. “But this is a blow. It’s counter-productive, it’s devastating, it’s frustrating. This is defeating to community policing. She is a brilliant captain, but where does this leave us?”

Paulson said at the meeting that progress has been made in addressing crime in the Melrose area, but there are still many challenges. She credited a high-visibility police presence and the arrest of two men who were allegedly targeting people wearing expensive jewelry as helping to keep the numbers somewhat stable. Still, robberies are up 40% division-wide this year over the same period in 2020, and aggravated assaults are up 9%. Burglaries are down almost 22%, but vehicle thefts remain high, up 53% this year over last year.

Paulson also addressed recent hate crimes perpetrated against members of the Jewish community in May and said solving the crimes has been a priority. She said detectives worked tirelessly, coming in on days off and traveling long distances to investigate the crimes and make arrests. Two suspects were arrested on different days in Anaheim and the Inland Empire. Paulson said the investigation is ongoing and anyone with information is urged to call investigators at (213)922-8230, or email wilshiremac@lapd.online.

“The Los Angeles Police Department is very active gathering information about potential hate crimes or hate incidents. The public has sent numerous tips and they have been beneficial,” she said. “We are making every effort possible to get extra deployments out there. It’s a very exhaustive process, but I am very confident we will continue to make progress and that additional suspects will be identified and arrested.”

Paulson also addressed a pervasive problem that has recently caused much concern in the Melrose community – a renegade motorcycle gang that shows up unexpectedly on off-road bikes and quads and takes over streets and sidewalks.

Paulson said police have been gathering information about the group, but declined to give specifics about what has been determined. She said the LAPD’s West Traffic Division has a special task force to address street racing and the motorcycle takeovers, but it’s hard to figure out when and where they might occur. People are advised to call 911 if they see a group taking over an area.

“We had these COVID restrictions and it really started these things. What you have is large groups of illegal motorcycles,” Paulson said. “In and of itself, these motorcycles are not street legal. We know they are coming up from south of us and they have gone into Hollywood. We have seen the same type of activity in the area of The Grove.”

Paulson added that police are using special tactics to identify those who may be in charge of the group, or “leading the pack,” as she said. Paulson declined to say what those tactics are but said they are making strides in figuring out who is organizing the motorcycle takeovers.

“It’s difficult for law enforcement to follow them and take action,” Paulson added. “I’m not going to lie, it can be very challenging. But we are working with our partners to try to be creative and come up with a solution.”

Council backs plan for paid time off for vaccinations, recovery