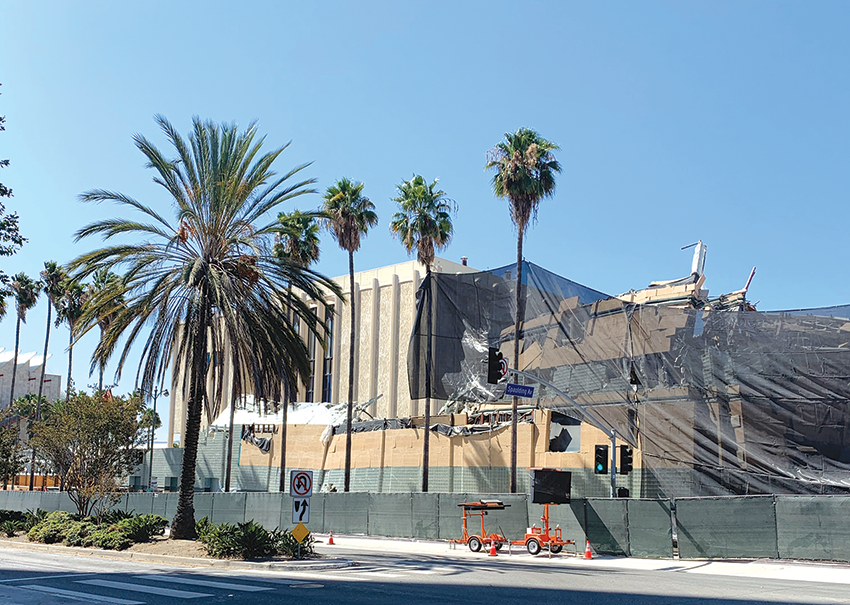 Pieces of the now-demolished buildings at LACMA will be repurposed for a park in West Hollywood. (photo by Karen Villalpando)

A pocket park project in West Hollywood that has not been publicly discussed since July 2020 has resurfaced, as city staff are looking to move forward on a 1,000-square-foot park development at Melrose Avenue and Norwich Drive.

The West Hollywood City Council included the project on its agenda at the beginning of June, but technical difficulties prevented the item from being considered. Due to the delay, the city scheduled a community meeting the night of June 30, after press time.

Thus far, feedback for the proposed project – referred to as the Melrose Norwich Gathering Space – has been mixed, said Rachel Dimond, senior planner in the city’s Long Range Planning Division.

“Frankly, I expect that type of response when it comes to art,” she said. “Art speaks to different people in different ways. … We want something that creates a respite from the city and provides art integration into that space. Ultimately, that’s what we’re proposing.”

Dimond said the park is part of the city’s Design District Streetscape Master Plan project, which was adopted in 2013 and looks to “redo the entire streetscape of that neighborhood” by expanding sidewalks, adding seating, improving lighting and more. The Melrose Norwich Gathering Space is among three such spaces included in the project, she said.

The gathering space will incorporate fragments collected from the demolition of the William Pereira-designed buildings at the Los Angeles County Museum of Art to reimagine the space as a “folly ruin,” according to a staff report.

“They wanted to have a permanent art element as part of this gathering space,” she added.

In August 2019, the West Hollywood City Council approved the Arts and Cultural Affairs Commission recommendation to select Cayetano Ferrer as the artist to collaborate with the city’s engineering consultant, Kabbara Engineering, the staff report states.

The Arts and Cultural Affairs Commission in July 2020 approved the final art plan for Ferrer’s “Extraction,” the integrated art component of the project, which will cost nearly $200,000. The plan looks to provide a “new local destination for respite, visual interest and placemaking,” according to the staff report.

“It’s something that we don’t have anywhere else in the city,” Dimond said.

She said the project is “an interesting contemplation of the space.” However, city staff wanted another opportunity to speak to the community prior to the city’s purchase of the artwork on July 23, Dimond said.

“We generally don’t hang on to pieces in perpetuity,” she added.

In 2019, residents voiced concerns over the possibility that the pocket park could become problematic given the area’s homeless “situation,” said Manny Rodriguez, vice president of the West Hollywood West Residents Association. During a community meeting on the project in January 2020, some residents felt that the art was a bit “apocalyptic.”

“Universally, I would say the majority of the people at the meeting were not pleased,” Rodriguez said. “They didn’t like it. They didn’t think it was inviting or attractive.”

He said community members noticed that the project was on the council’s June agenda without recent correspondence between residents and the city. Dimond said Wednesday’s meeting was an attempt to rectify that.

Rodriguez said the park “is a nice idea,” but it must be attractive, useful and beneficial to the surrounding community. He said he hopes the city takes residents’ feedback into account as it continues to move forward with the project.

What a thrill to sit on the top of LACMA. I’m all for it!