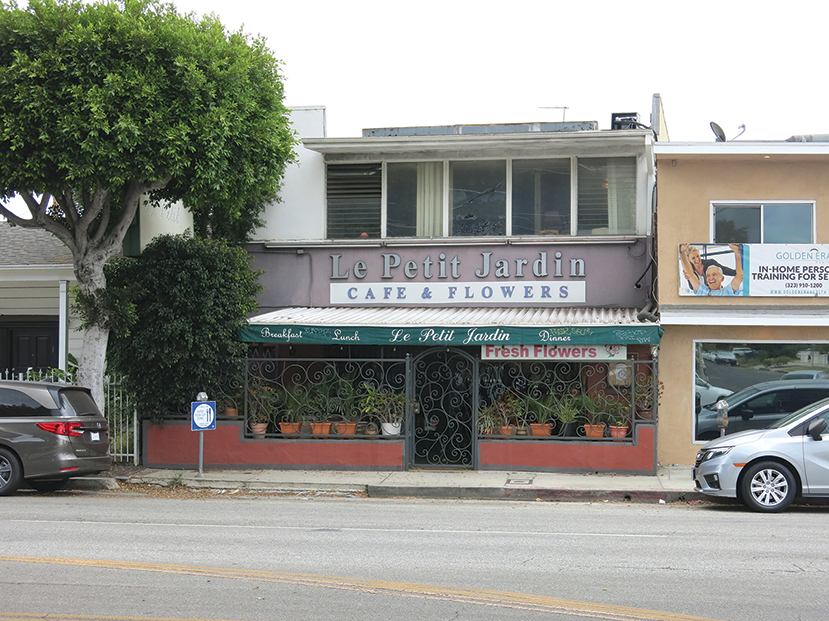 Le Petit Jardin will be demolished to make way for the SORO Hotel if the project is approved. (photo by Cameron Kiszla)

A proposed hotel on Robertson Boulevard is expected to be considered by the Los Angeles Planning Commission this morning, June 10. The meeting is scheduled to begin at 8:30 a.m.

The project, which goes by the name SORO Hotel – which stands for south of Robertson – would construct 131 hotel rooms at 1434-1456 S. Robertson Blvd. According to Ira Handelman, a consultant and spokesman for the project, the hotel would serve the Orthodox Jewish community, allowing guests to observe the restrictions of the sabbath, such as a prohibition on operating mechanical and electrical equipment, and by offering kosher dining and banquet areas.

“The SORO Hotel will provide a place for guests to stay close to the families or businesses they are visiting, which is also within walking distance of temples and synagogues where they can conveniently worship,” the development team wrote in a document provided by Handelman.

However, the project has drawn criticism from some in the community, including Priscilla Sotelo Klisch, whose family has owned the café and flower shop Le Petit Jardin at 1456 S. Robertson Blvd. for 27 years. Plans for the hotel call for the café building, which according to city documents is owned by Harkham Family Enterprises, to be torn down to make way for the hotel.

“If I don’t have my restaurant, we don’t make money. We don’t have jobs,” Sotelo Klisch said.

Carly Kirchen and Charlie Carnow, research analysts with Unite Here Local 11, which is opposing the project unless changes are made, noted that the eatery is beloved by the neighborhood. Kirchen and Carnow noted that the union’s primary concern in opposing the project is the removal of 12 affordable housing units to make way for the hotel, which contains no housing units, but protecting Le Petit Jardin would be a benefit “for the whole community.”

“[Le Petit Jardin] sells flowers to people for Shabbat and she has for many years … This is something that for generations, people saw their fathers give their mothers flowers every Friday night, and they give their wives flowers now,” said Carnow, who lives close to the project site and personally wants to support “small businesses that are such a critical part of the community.”

“This project is the demolition of rent-stabilized housing with no plan for replacement, as well as small businesses, including the beloved Le Petit Jardin,” Kirchen said.

One of those affordable units belongs to Sotelo Klisch, who lives with her father above the restaurant. She said the developers, which city documents identify as Van Nuys-based QES Inc., have offered $30,000 for her and her father to relocate from their residence and their business, an amount she described as “a joke” and “an insult.”

“As far as I’m concerned, I’m not accepting a deal, especially one that’s so ridiculously low,” Sotelo Klisch said. 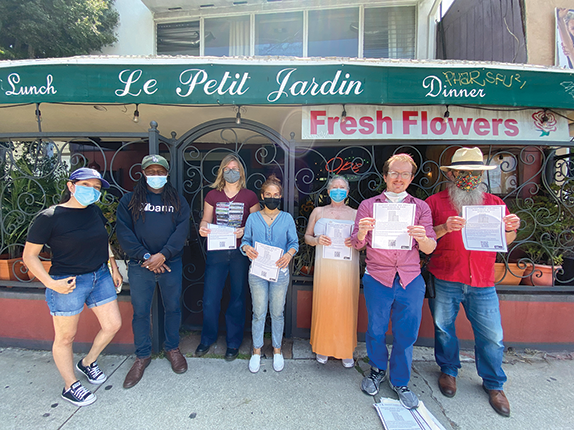 “We are still in discussions about her unit and we are going to be making an above-required offer to her. The business is separate; there’s no requirement to compensate for a business … but we’re still in negotiations with her about ways we can help her,” Handelman said.

As for the housing issue, Unite Here Local 11 is looking to see affordable units included as part of the project, something the union was successful in doing in a mixed-use project near the intersection of Wilshire Boulevard and La Brea Avenue earlier this year. In that project, a settlement between the developers and Unite Here Local 11 resulted in the addition of five more affordable units than had originally been planned, as well as more sustainable building practices and better traffic circulation.

“I’m proud that we were able to get more affordable housing in that project, a good example of housing and hotel space, to show that we’re really not crazy for asking for this really commonplace thing nowadays. Throughout that process, the developer added four new affordable units, and we hope that people can take a lesson to do the right thing,” Carnow said.

Handelman noted that housing “is an important issue citywide,” but said there were no plans to include housing in this project.

“We believe that in this location, a hotel that meets the needs of the Orthodox Jewish community is an important use to revitalize the community and bring some people to the neighborhood. We’re not disputing that housing is a big issue, but not every project can solve every problem,” Handelman said.

Aside from housing concerns, Carnow, Kirchen and Sotelo Klisch noted that the hotel’s seven-story height is dramatically higher than the one- and two-story buildings currently in the area.

“We don’t have tall buildings [in our neighborhood] … This building will stand out in a strange way from the neighborhood,” Sotelo Klisch said.

Handelman noted that the hotel’s height was in accordance with city code.

“This area needs development. We feel that this is a positive addition. There’s a lot of support for the project. There are a number of synagogues supporting it,” Handelman said.

Those supporters include the Young Sephardic Community Center, Congregation Knesset Israel and others, Handelman added.

Three candidates for Los Angeles City Council District 5 in the March 2022 election have taken stances against the project on Twitter.

“This project would demolish 12 rent-stabilized housing units [without] replacing a single one. Existing tenants would likely be priced out of the community … I support new hotel construction in L.A. [and] CD5. But it must not be done at the expense of community members’ housing security, and should be designed in a way to enhance the community,” Scott Epstein said.

“Putting aside neighborhood concerns about height [and] massing, the permanent elimination of rent stabilized units without provision for replacement is unacceptable,” Katy Young Yaroslavsky said.

The current representative of the 5th District, City Councilman Paul Koretz, has yet to take a stance on the project, he said in an email.

“There are pros and cons on both sides, and I am still weighing the issues relating to this project,” he said.