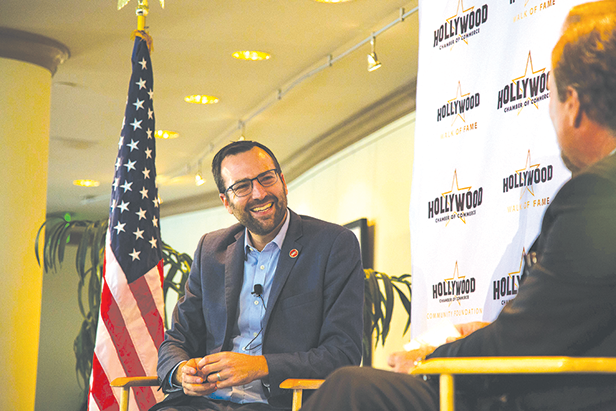 State Sen. Ben Allen also addressed the Hollywood Chamber of Commerce in the 2019 State of the State event. (photo by Mitch Kampf)

It’s been more than a year, but Hollywood – and the state of California as a whole – is still dealing with the effects of the pandemic, state legislators told the Hollywood Chamber of Commerce on June 22-23.

State Sen. Ben Allen and Assemblyman Richard Bloom (both D-Santa Monica) each appeared for half an hour as part of the chamber’s State of the State virtual event.

Allen noted that officials are “certainly feeling much better about where we are right now,” but the fight against COVID-19 is not over yet.

“We can’t overlook the incredible damage the pandemic wrought … and the long and hard road to economic recovery that’s in front of us,” Allen said.

“Things have not gotten back to normal yet, but we’re on the right path,” Bloom added.

Allen noted that much of the Legislature’s work has focused on assisting small businesses, film and television production, hospitality and tourism, and other economic sectors that were disproportionately impacted by the pandemic. As examples, he cited the waiver of fees for licenses for barbers and cosmetologists, who were unable to practice for large periods during the pandemic, and nearly $100 million for Visit California, “which will hopefully help the tourism industry,” he said.

Some of that pandemic assistance is also intended to help alleviate some of the structural issues that have plagued the entertainment industry for decades, such as efforts to “create a more diverse workforce for Hollywood and TV and film production,” Allen added.

“As our sound stages and our streets hopefully roar back to life with TV and film production, we’re hoping this will dovetail with a number of legislative efforts … including [Senate Bill] 611, career pathways within California’s entertainment industry,” Allen said.

Bloom noted that state funding also needs to be used to assist with pandemic-related “residual issues that we’ll need to address.”

“Chief among those will be addressing long-term mental health issues,” Bloom said. 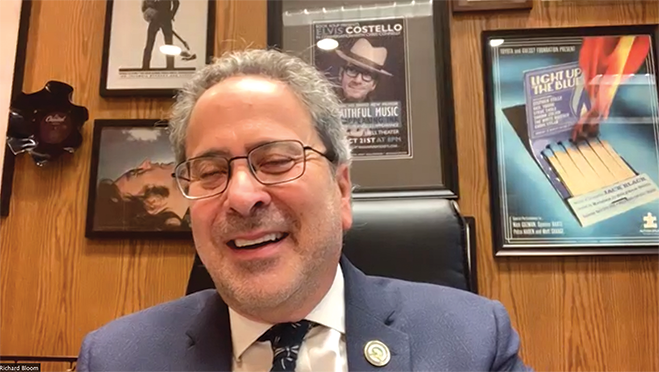 The legislators answered a few questions put to them by chamber staff. In one of his answers, Allen addressed homelessness, especially in the Hollywood area, and took that opportunity to praise City Councilman Mitch O’Farrell, 13th District, and his efforts to combat homelessness, which “is getting to epic proportions.” Noting that “something like $12 billion” of the state’s budget surplus is going to local efforts to decrease homelessness, Allen made it clear that he views the state’s role as providing “resources and support” for local efforts, not “tying them up with legislation.”

“We’re still working out the details, but in the end it’s about funding for permanent housing and services, and I’m supportive of the work of Mitch O’Farrell, your council member, his approach,” Allen said.

Allen noted that O’Farrell received some criticism for the recent clearing a homeless encampment at Echo Park Lake, but the senator defended the councilman.

“All of those folks [were offered] the support they need,” Allen said. “I think for those people who criticized his efforts, I’m not sure that having them in the park there with subpar services and environmental concerns in the lake … I’m not sure how compassionate it would be to have the status quo moving forward in that park.”

Since the park was cleared, the recreation facilities have reopened for public use.

Allen also noted that there have been “creative tensions” between O’Farrell and fellow Councilman Mike Bonin, 11th District, and Councilwoman Nithya Raman, 4th District, but his role is to say, “I’m here to help you get this under control,” and help is coming from the state level through this year’s budget.

“I do think we should all feel good about what we were able to secure for arts, business industries and homelessness,” Allen said.

Bloom agreed that state government has to help localities with their efforts, but he believes the state should step in on issues like housing “when we’re not getting the job done locally.” He noted that “the housing affordability crisis continues,” hindering progress on combatting homelessness, and progress needs to be made, but the state should not overstep its bounds.

“We need to be conscientious here in Sacramento that we do not undermine the local control in our local communities … We need to try at all times to try to find the right balance there,” Bloom said.

Bloom said part of that state-level help will be for California to build the government apparatus to most effectively distribute federal aid coming from Washington, D.C.

“There is so much money coming into the state right now that we have to figure out how to scale up so we can actually spend the money … We need to have the infrastructure in terms of workers and management capacity and so forth to move projects forward,” Bloom said.

On other issues, however, progress is being made, Bloom said. He cited forward momentum with anti-hate-crime legislation and with reforms at the Unemployment Development Department as examples of success.

“There is light at the end of the tunnel,” Bloom said.