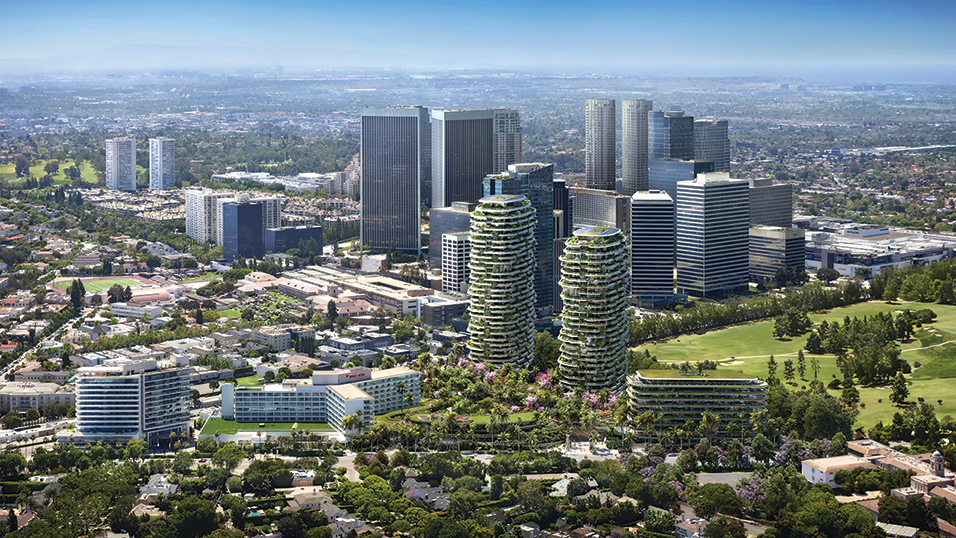 The One Beverly Hills project may bring multiple towers to the western portion of Beverly Hills. (rendering © DBOX for Alagem Capital Group)

With a 4-1 vote on June 1, the council approved the details of the One Beverly Hills project, which will include residences, hotels – including the existing Waldorf Astoria and the Beverly Hilton – retail and restaurant space, and botanical gardens on both sides of Merv Griffin Way. The council directed staff to return with an ordinance confirming the approval, which will be considered in a final vote on June 8.

“All we get is happy talk and inaction,” Mirisch said.

Instead, he proposed that 15% of the project be set aside for affordable housing, which he said “would be completely reasonable for a project of this scale and magnitude.”

“Here, we have an opportunity that if we miss, we will never get again. There will be no mulligans,” Mirisch said.

The other four council members, however, pointed out that the development agreement includes a guaranteed $100 million for the city in addition to increased hotel tax payments, fees from the sale of condominium units and other benefits that are expected to total at least $1.7 billion and could reach nearly $3 billion.

“The $1.7 billion will be able to afford us as much affordable housing as we want, which is significant,” Vice Mayor Lili Bosse said.

“I honestly think this is a deal that affords the city enormous financial benefit and a benefit that will accrue in the years and decades to come,” Councilman Julian Gold added.

The other council members expressed their support for affordable housing and reiterated that the payment of money, instead of dedicated affordable units, allows them flexibility in finding the best sites and most effective methods of constructing affordable housing.

“Affordable housing is necessary, and it must be funded and built in a smart and planned manner,” Councilman Lester Friedman said.

During the meetings, the council also addressed several outstanding issues related to the project, including the letter sent by an attorney for the project’s head, Beny Alagem, that called the written public comment by Beverly Hills residents Andrea and Rick Grossman “defamation.”

Alagem addressed the council to offer his “sincere apologies” to the Grossmans.

“Over the weekend, I learned of a personal attack against me that contained statements that were just not true,” Alagem said. “It provoked a reaction, and I feel bad about all that happened … I take responsibility.”

Mirisch, who took umbrage at the attorney’s letter last week, said it was “very noble” for Alagem to take responsibility.

“It’s important that all of our residents can comment on whatever they want and communicate their feelings to the council,” Mirisch said.

Another issue that raised some consternation among the council members – the pedestrian entrance to the public portion of the gardens from Santa Monica Boulevard – also appears to have been remedied. The development team presented a revised rendering showing a spiral ramp entrance to the gardens, with an elevator running up the center of the spiral. 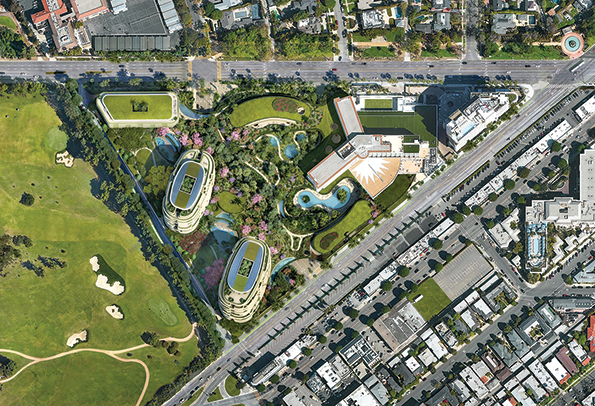 The public will be able to access 4.5 acres of botanical gardens at One Beverly Hills. (rendering © DBOX for Alagem Capital Group)

The council members seemed pleased with this plan, which allows park visitors to enter without going indoors.

“I think this presents a more open way for the community to get up to the public gardens and the public area from Santa Monica Boulevard,” Mayor Robert Wunderlich said.

The council also approved a plan to allow for an amenity access program for the private areas of the gardens, which are limited to residents of the condominium units and hotel guests. Four council members agreed that the program should be allowed with a maximum of 250 members, at least initially. Mirisch, however, was opposed.

Mirisch was also opposed to a plan for some condominiums to be sold in shares – most likely in one-twelfth portions – and for the owners to split their time at One Beverly Hills. Mirisch called the plan “timeshares” by another name and said the plan “has no place in our city, period.”

“I would much prefer to see, instead of the timeshares there, a hotel. That’s what it should be,” Mirisch said.

Wunderlich joined Mirisch in opposing the fractional ownership plan, but with the other three council members in favor, the plan moved forward, pending more details to be provided to the council for final approval.

“I see it as people putting their foot in the water, as to being in our community … I think it would be an asset,” Friedman said.

Though there was support, the council members made clear that they wanted additional information before giving the idea full authorization. Gold said they needed “a much more detailed plan” before final approval would be awarded.

“Failing that [final approval, the units] would revert to either full-ownership condos or hotel rooms,” Gold said.

The council also came to an agreement on ideas for a pair of streets that abut the project site: Santa Monica Boulevard and Merv Griffin Way.

For Santa Monica Boulevard, the council supported the construction of a protected bicycle lane, though Community Development Director Ryan Gohlich said the “design details” will come back to the council for consideration once the city’s Department of Public Works is ready.

The configuration of Merv Griffin Way, which travels underneath the project’s podium, will also be considered, though the width will remain unchanged so that the development team can move forward without having to account for a widened or narrowed street.

Per Wunderlich’s proposal, a traffic study will be conducted to see if the current configuration can be enhanced.

“I would ask that we put in some more effort to see if [the Merv Griffin Way configuration] could be improved upon,” Wunderlich said.