The Beverly Hills City Council on June 8 gave the One Beverly Hills project the necessary approvals, but not without some conflict between council members.

The 4-1 vote was opposed by Councilman John Mirisch, who raised several issues with the project, including that more should be done to create affordable housing. Mirisch cited several pieces of evidence, including the recently completed nexus study from Kathe Head and Keyser Marston Associates, which estimated that the new hotels, residences and businesses in the mixed-use project would create a need for 527 new affordable units in the surrounding area.

“Ignoring the nexus study is pretty much proof positive that the council majority could care less about affordable housing,” Mirisch said.

The project does not include affordable housing on site, but as part of the development agreement, the developer is paying the city $100 million, which the council members have said they plan to use for affordable housing. Mirisch reiterated that “talk is cheap” multiple times during his comments.

“We had a chance to change the narrative on affordable housing, to fix our abysmal record, and we failed to do so … This council chose to prioritize deca-millionaires and billionaires over the most vulnerable in our community,” he said.

The other council members disagreed with Mirisch’s assessment, and Vice Mayor Lili Bosse responded directly to his comments, which she said left her “almost speechless.”

“This entire council, as was stated at the last meeting and all meetings, has been unanimous … in our support for affordable housing,” Bosse said.

Bosse also protested “divisiveness” after a tough last year with the pandemic and national political squabbles.

“Everybody here makes all of their decisions with a lens of fiscal responsibility, with a moral compass and with an ethical compass … What makes Beverly Hills the great city that we are, why we choose to live here, why we love it with every ounce of our being, is that we all have the same values and goals, and we’re all respectful to each other. We treat each other with respect,” Bosse said. “At times we might disagree, but at the end of the day, we all have the same goal.” 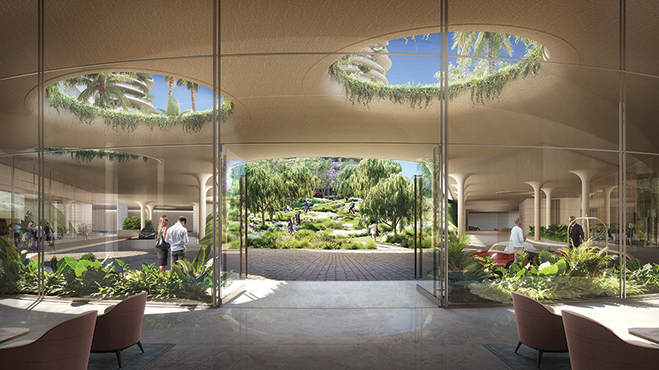 The botanical gardens will be on a podium above the street access to Merv Griffin Way, which will travel under the podium. (rendering © DBOX for Alagem Capital Group)

Bosse also defended the project, which she said is “breathtakingly beautiful” and “complements the neighboring surrounding area.”

“To me, this is the next 100 years. You may agree, you may disagree, but one thing you need to know: every single person on this council cares about this community, has the same values about this community, has the same integrity and the same passion about the future of Beverly Hills … This will be for our children and our grandchildren and something we can be proud of,” Bosse said.

The other council members also expressed support for the project and the process of creating the development agreement, which they said will help ensure that hundreds of millions or billions of dollars in tax revenue and payments come to the city over the next few decades.

“This is a project that is very important for the sustainability of the city, long-term … It will provide substantial funds for the city,” Mayor Robert Wunderlich said.

Beyond the financial benefits, the council members praised the project’s aesthetics – it’s designed by well-known British architect Lord Norman Foster – and the role it will serve as a gateway landmark for those coming from the west.

“There is no other project in the city of Beverly Hills that I could support with the height of these buildings … This property has a singular, unique characteristic and location that can support the buildings that are planned,” Councilman Lester Friedman said.

The fact that the structure will serve as a gateway to the city helps the city meet one of the goals of its general plan, the council members said, and Councilman Julian Gold expressed hope that the project could eventually serve as a symbolic structure for the city, similar to the role played by the Sydney Opera House.

“I believe this will become that sort of iconic image of Beverly Hills into the next decades,” Gold said.