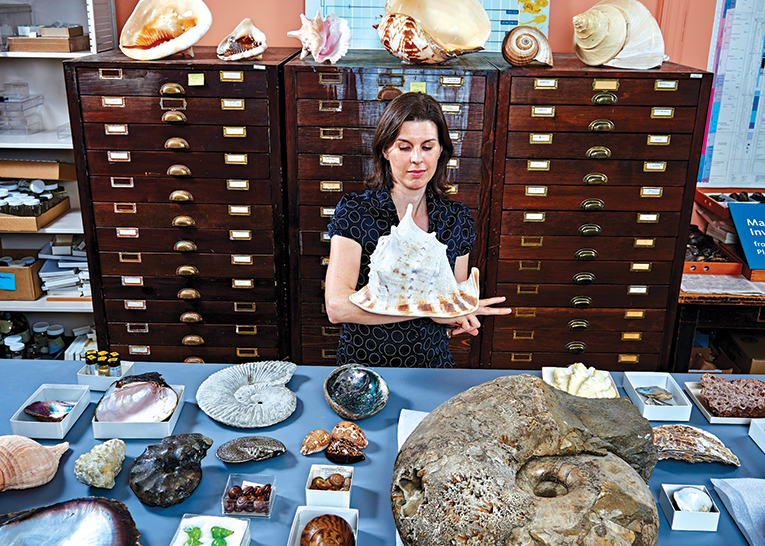 Dr. Jann Vendetti, NHM’s associate curator of malacology (mollusks) and the Twila Bratcher chair in malacological research, is among the museum scientists who will lead the programs. (photo courtesy of NHMLAC)

In honor of World Oceans Day, the Natural History Museums of Los Angeles County and Nickelodeon have launched “Science of SpongeBob,” a new initiative based on the “SpongeBob SquarePants” animated series.

The program will introduce children and families to the science that inspired the undersea world of Bikini Bottom and its beloved inhabitants. With the help of Natural History Museum experts, audiences will learn about different scientific disciplines, including marine biology, paleontology, ichthyology and mammalogy, as well as the scientific discovery process that contributed to the creation and development of the show. Dynamic videos, activities and live programs with NHM scientists and educators are available for viewing by visiting nhm.org/spongebob.

“We are thrilled to be working with Nickelodeon again on a program that demonstrates the excitement of scientific research and discovery, as well as the range of career pathways available in museum science,” said Dr. Lori Bettison-Varga, president and director of the Natural History Museums of Los Angeles County. “As we continue to encourage scientific exploration and share our research and collections, we hope that kids and families are inspired to take responsibility for the care of our natural world.”

NHMLAC has collaborated with Nickelodeon to create eight videos featuring scientists from NHM’s Research and Collections Department. The videos feature clips from episodes of “SpongeBob SquarePants” that demonstrate how science has been incorporated into the TV show, its characters and storylines. The videos provide information on the underwater ecosystems that comprise the world of Bikini Bottom, where the show is set, by exploring various topics. They will also feature behind-the-scenes exploration of NHM’s collections, allowing access to many items rarely seen by the public.

Scientists will also share tips for overcoming ocean fears, observing marine life and avoiding misconceptions about marine science. Viewers can learn about the ocean animals that SpongeBob and the citizens of Bikini Bottom are based on, the small steps individuals can take to protect oceans, how scientists create unique species names, the different types of ocean habitats, deep sea dangers and silly sea facts.

For information and a complete schedule of programs, visit nhm.org/spongebob.

BHUSD to fly rainbow flags at all schools and district office