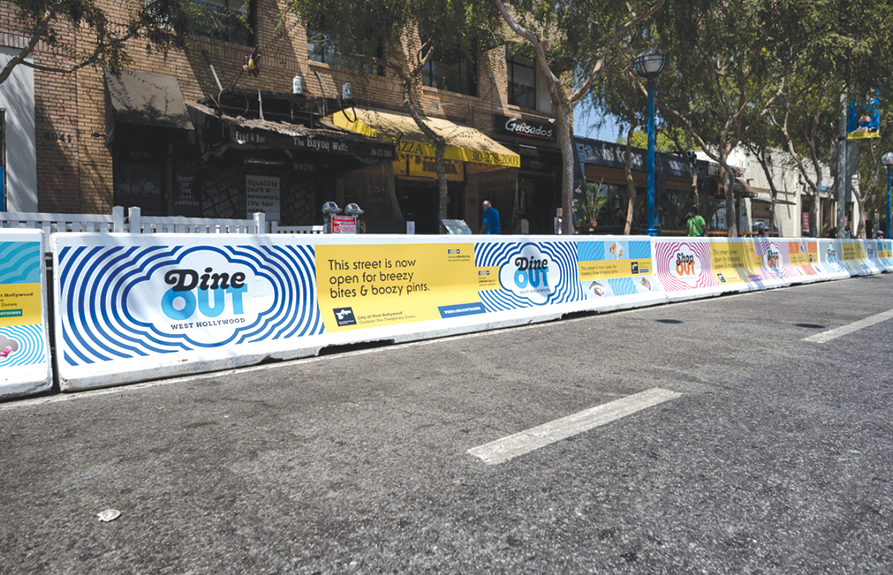 OUT Zones were created last year to provide businesses a way to operate outdoors during the pandemic. (photo courtesy of the city of West Hollywood)

The West Hollywood City Council may soon permit local businesses to once again host live, outdoor entertainment if an amended executive order proposed by the city’s manager and director of emergency services is approved.

The council was slated to vote on the proposal on Monday, but technical issues with the virtual meeting prevented the item from being discussed.

According to a staff report, businesses would seek approval for live events, and city staff would determine whether the location is suitable. West Hollywood’s Code Compliance Division would ensure businesses adhere to the city’s guidelines.

“We need to evaluate each and every possible location,” Councilman John D’Amico said.

D’Amico said he supports ratifying the order “on its face,” but he would like to hear input from his fellow council members and the public. D’Amico said the pandemic has shown that the city can be more creative with its public and private outdoor spaces, as evidenced by its OUT Zone – which stands for Outdoor Use Temporary – program.

“It’s created a much more alive and breathing city for me,” he added.

However, some organizations have been outspoken against some of the OUT Zone areas, particularly the area included in the Robertson Closure Pilot Program, which closes Robertson Boulevard from Santa Monica Boulevard to Melrose Avenue from 6 p.m. on Saturdays to 2 a.m. on Mondays.

The council approved the Robertson pilot project in March with no outreach to neighborhood associations, he said. Rodriguez added that few businesses and organizations have utilized the outdoor space.

Rodriguez said the association did not support the project when it was originally proposed. He said the council closed a street that has been open for years. However, he admitted that it has not increased traffic in the area.

“We’re very happy about that,” Rodriguez said, adding that the lack of participation may explain the lack of additional traffic.

D’Amico acknowledged some of the criticisms the OUT on Robertson program has received. Yet, the project has had no negative impact that has been documented on Robertson Boulevard, he said.

“It’s really less about OUT on Robertson and more about how people organize cities in their head,” he said, adding that some residents are accustomed to streets only being used for vehicular traffic.

D’Amico described the program as being a “moderate” success. He said the May 1 kickoff of the pilot project coincided with the loosening of indoor capacity restrictions for businesses, which made it difficult for some to participate.

“It’s a solid B-plus,” D’Amico said about the program so far.

According to the staff report, the amended order would allow live entertainment in the OUT on Robertson pilot program area between 11 a.m. and 10 p.m. when Robertson Boulevard is closed.

The city started the OUT Zone program in September 2020 to streamline approvals for businesses seeking to use public and private property to expand outdoor operations, according to the staff report. An executive order expanded the program in April to temporarily allow bars to operate outdoors.

The council is scheduled to vote on the amended executive order at its June 21 meeting.

Hamburger Mary’s has been using it’s OUTzone in the parking lot right next to apartments for months now, with amplified music and drag shows. Despite resident complaints, the only thing the city seems interested in doing is codifying this bad behavior into law. Good move! Can I open a nightclub on my roof?