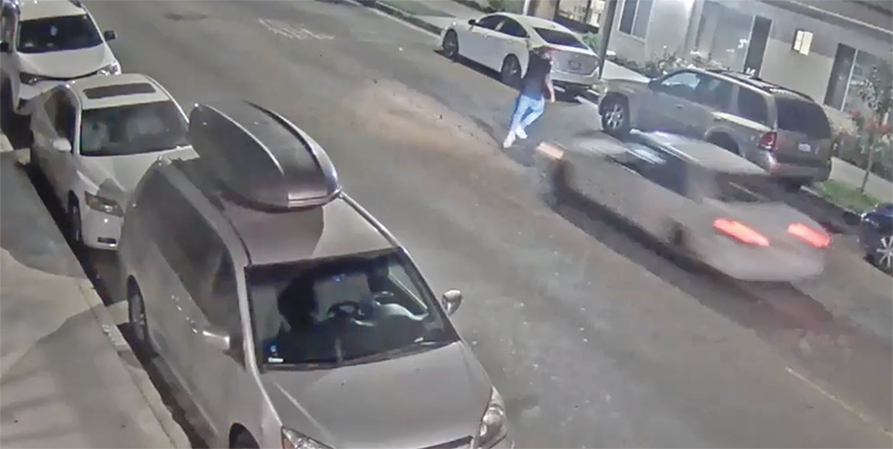 Security camera video showed the vehicle seconds before it struck the victim on Fountain Avenue. (photo courtesy of the LAPD)

Detectives with the Los Angeles Police Department’s West Traffic Division have released video and security camera photographs of a hit-and-run collision in Hollywood that left a man seriously injured.

Police recently found and released security camera footage of the alleged vehicle that was involved in the collision which occurred at approximately 9 p.m. on March 31. The victim was crossing Fountain Avenue near Hobart Boulevard when he was struck by a small white car. The vehicle, which was traveling eastbound on Fountain Avenue, did not slow down prior to the collision.

“He was crossing Fountain Avenue, kind of diagonally,” said Officer P. Delaney, of the LAPD’s West Traffic Division. “He looked to the right but then kept crossing. He was wearing headphones and may have been listening to music or something and didn’t see the car.”

Delaney said he was recently assigned the case and canvassed the neighborhood for cameras. He found footage that shows the collision as well as the nearby intersection.

“You can see the car actually ran the red light,” Delaney said. “[The victim] looked to the right and the light was red at the intersection. He may have seen the red light and didn’t see any traffic and kept crossing.”

The collision illustrates the danger of walking and being distracted, Delaney added, as headphones can sometimes cause pedestrians to be less aware of their surroundings. The victim was not using a crosswalk, which is also dangerous, he said.

“He had serious injuries but they were not life-threatening,” Delaney added. “We are hoping a tip will lead us to the driver.”

The vehicle is believed to be a 2005-07 four-door Hyundai Sonata. A $25,000 reward is available for information leading to an arrest and conviction in the case.

Suspect in custody for stabbing at Park La Brea