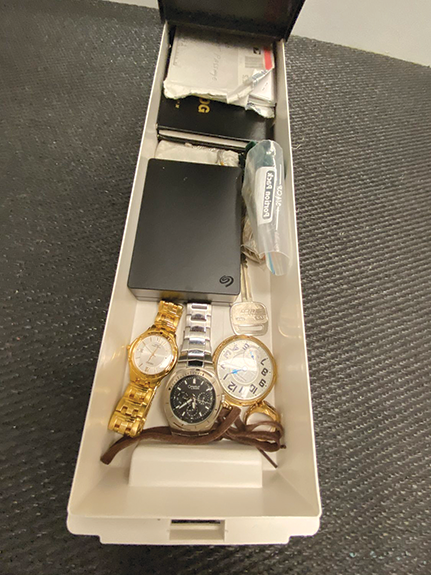 A safety deposit box belonging to Paula and Jennifer Snitko contained watches, computer hard drives and other items that are being held by the federal government. (photo courtesy of the Institute for Justice)

Four people whose valuables were seized by the FBI during a raid in March at U.S. Private Vaults in Beverly Hills have filed a class action lawsuit seeking to have their property returned.

The federal government has remained tight-lipped about its case against U.S. Private Vaults Inc., a Nevada-based company that operated a location at 9182 W. Olympic Blvd. Agents from the Federal Bureau of Investigation and the Drug Enforcement Administration served a search warrant at the business on March 22 and seized drugs, firearms and large amounts of gold bullion and cash, as well as other valuables, from safety deposit boxes, according to an affidavit supporting a federal indictment. U.S. Private Vaults is named in a criminal indictment that alleges three separate conspiracies to violate federal law, authorities said. The federal warrant authorizing the search remains sealed.

U.S. Private Vaults offered safe deposit boxes that the company advertised as being more secure than those at banks. High-tech security systems were used, including hand and retina scans, to gain access to the boxes.

The federal government believes some of the money and valuables stored at U.S. Private Vaults were obtained through illicit means. The business offered approximately 800 safe deposit boxes, and many were rented anonymously, authorities said. The U.S. Department of Justice has begun forfeiture proceedings on millions of dollars in cash, gold bars, jewelry and other valuables allegedly found in the boxes. A notice of the government’s intention to seize the property, as well as a list identifying dozens of boxes and their alleged contents, has been posted on the U.S. Private Vaults’ former website at usprivatevaults.com. The FBI has also posted a claim form on the website for people seeking to have their property returned. The deadline for filing a claim is June 24, and no further information was available about what happens to people’s property if claims are not submitted by that date.

The four people behind the class action lawsuit – Paul and Jennifer Snitko, a married couple from Pacific Palisades, and Joseph Ruiz and Tyler Gothier, individuals from Los Angeles – believe the process for having their property returned is burdensome and unfair. The lawsuit was filed on May 27 in U.S. District Court, alleging the federal government violated the Fourth Amendment to the Constitution by seizing property from the boxes. It seeks the immediate return of the property to anyone who is not involved in the alleged criminal acts.

The lawsuit was filed on the plaintiff’s behalf by the national nonprofit Institute for Justice. Attorney Robert Frommer, who is litigating the case, said damages are not being sought.

“We are specifically seeking the return of people’s property,” Frommer said. “The government should have never broken into these boxes at all. They had no reason to do that. If the government has probable cause, then they need to get a warrant for that particular person. The government can’t keep this property, and if it intends to do so, then it needs to articulate a valid reason.”

“In some cases, we believe that the items should be returned to boxholders, and we are in the process of returning material that was seized. In other cases, we believe that the items in a particular box are linked to criminal activity, and we have initiated forfeiture proceedings in those instances,” Mrozek said in a statement. “Individuals are entitled to make a claim on the property now subject to forfeiture. In cases where a person makes a claim, we can return the property, negotiate a settlement or file an asset forfeiture complaint in federal court. When a complaint is filed, the claimant has the opportunity to present evidence to the court that the property is not linked to criminal activity.”

The Snitkos, plaintiffs in the class action lawsuit, said they aren’t optimistic that it will be an easy process. They already filed a claim and said the FBI has told them that their property may be returned in a couple of weeks, but offered no specifics.

Paul Snitko said the items in his safety deposit box were not of particular monetary value, but some items are family heirlooms that are irreplaceable. They include a watch given to his father after he retired from a career with the railroad, as well as a watch given to him by an employer for 15 years of service. Jennifer Snitko had jewelry and items passed down from family in the box. Other property included backup computer hard drives with important family information, they said.

“The total value was under a thousand bucks, or even less on eBay,” Paul Snitko said. “We didn’t have a million in cash, but what we did have had sentimental value.”

Jennifer Snitko said aside from wanting their property back, the couple believes legal action is needed to hold the government accountable.

“To be honest, this isn’t right,” she added. “You just want to get your stuff back and go away. But if people don’t stand up for what’s right in this world, what’s next? It goes beyond you and getting your stuff back. We want to make sure it doesn’t happen to other people.”

Frommer said future court dates are pending, but the goal is to get injunctive relief in court so owners can have their property back as soon as possible. Aside from the Snitkos, Frommer said Ruiz had approximately $57,000 from a settlement, and Gothier had a small amount of silver and personal belongings.

“Hundreds of people did nothing wrong and now their property has been taken,” Frommer added. “We think the government should answer for that.”