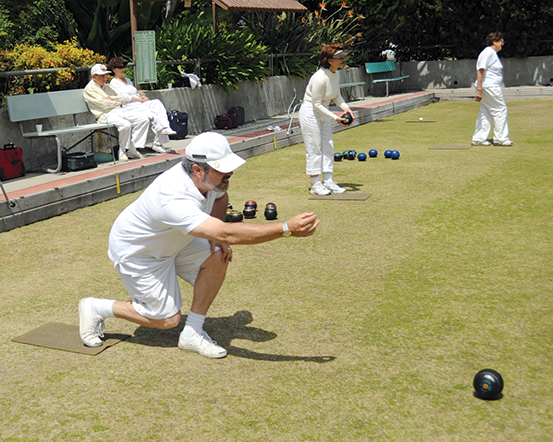 Exercise and socialization are important for staying healthy as people age, which is something members of the Holmby Park Lawn Bowling Club know well.

The club has approximately 90 active members, most ages 50 and above, who gather up to three times a week for a friendly game. Members said they enjoy conversation and camaraderie as they compete in one of the world’s oldest sports, dating to the 12th century. The club is holding an open house on Saturday, June 12, at 10 a.m., and encourages everyone to stop by and experience the joy of lawn bowling – free lessons will be provided.

“First, the club is in a very beautiful park. This is one of the gems of the area,” said Tom Seres, who has served as club president for 20 years. “It’s a traditional game invented by the Brits, and it became very popular. What’s interesting is around the world, it’s played by people in their 30s, 40s and 50s, but in America, it became a game for people who are retired or are going to retire. Apart from the game, it is very social. The social interaction is almost as important as the game itself.”

The club plays on expansive greens in a fenced area dedicated to lawn bowling in Holmby Park, located at 646 Comstock Ave., next to the Los Angeles Country Club and just west of Beverly Hills. During play, each green is divided into smaller areas known as rinks. The facility is large enough that multiple games can be played simultaneously, accommodating dozens of people. Teams of one to three players compete against each other on separate rinks.

To start a game, a white ball known as a jack is rolled out onto the green. The players then roll bowls – not balls – toward the jack, trying to get as close as possible. The bowls are not perfectly round, which causes them to curve right or left as they roll across the green. The player or team that finishes a round, known as an end, with their bowls closest to the jack wins that round. Games typically have 12 to 14 ends.

The Holmby Park Lawn Bowling Club was founded in 1927. Famous players of the game include Shirley Temple and Walt Disney. In his later years, former President Ronald Reagan is said to have stopped by to watch members of the club play.

Holmby Park Lawn Bowling Club member Vicki Goddard, who took up the sport in 2019, said it’s a wonderful game that is a lot of fun. The club meets on Tuesdays and Thursdays at 11 a.m. and on Saturdays at 10:30 a.m. During the summer, the club sometimes opens on Wednesday evenings, she added.

“I usually try to play Tuesday and Thursday, and sometimes Saturday,” Goddard said. “I really like the people; they are very nice. It’s an interesting mixture. I live in Holmby Hills, but you have people from Park La Brea all the way to Pacific Palisades who come, and a few people come from the Valley. We welcome people to come by and learn the game.”

Goddard said the club loans bowls to new members until they purchase their own. She said inexpensive bowls can be found online, and new ones start around $50. Many of the members wear white clothing, which is a tradition in lawn bowling, but the club is very casual and white apparel is not mandatory, Goddard added.

“It’s very relaxed. It’s not the French Open,” she joked. “If they show up at the open house, we’ll welcome them. We welcome all ages. They can take free lessons, or if they just want to learn about the game, we encourage them to stop by.”

Seres said he hopes many people will visit during the open house and take up the sport. Membership is $95 annually, but Seres said it will be reduced to $50, covering the rest of 2021, on June 12.

“It’s great when new people come in. It’s very satisfying to see new people meld into the existing group,” he added. “The friendliness of the group has always been a big selling point.”