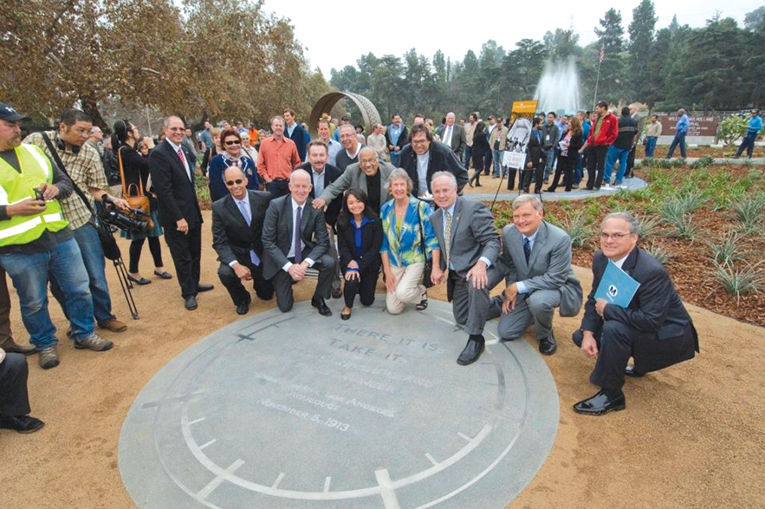 Councilman Tom LaBonge, third from right in front, helped dedicate the new Centennial Garden at the Mulholland Fountain in 2013. (photo courtesy of LADWP)

The Los Angeles Department of Water and Power Board of Commissioners has approved the renaming of two historically significant facilities in honor of the late 4th District Councilman and longtime LADWP supporter Tom LaBonge, who died on Jan. 7.

The Headworks Water Complex also held special meaning for LaBonge, LADWP officials said. In 2015, the councilman participated in a ribbon cutting ceremony for the completion of the East Reservoir project at the complex, which is the largest underground drinking water reservoir in the western United States. Headworks is located on a 43-acre site located along the 134 Freeway and across from the north entrance to Griffith Park.

The complex replaces the Silver Lake and Ivanhoe reservoirs, and LaBonge conceived the idea of relocating the water storage sites to meet new water quality regulations stipulating that drinking water reservoirs be covered. Public open space will be created on top of the reservoirs.

“Tom LaBonge made his mark on the city and on many LADWP projects, including the Aqueduct Centennial Garden and the Headworks Reservoir Complex, that have come to be synonymous with the communities he served,” LADWP Board of Water and Power President Cynthia McClain-Hill said. “Having these facilities bear his name means generations of Angelenos and visitors will be reminded of the passion and dedication the late council member poured into public service and into the city he loved.”

In 1978, LaBonge began his public service career with Councilman John Ferraro, 4th District. He later served as an aide to former Mayor Richard Riordan before being elected councilman representing the 4th District. He also worked at LADWP for a short period of time as director of community relations.

“Councilmember Tom LaBonge loved L.A.’s history, and that included LADWP’s history, and reminded us all that we were writing its history everyday by the work that we do here,” LADWP General Manager and Chief Engineer Martin Adams said. “That’s why I can’t think of a more fitting tribute than for the department to honor Tom’s memory by renaming two of our most historically significant facilities in his honor. He will be sorely missed but his legacy lives on.”

Whats up with muholland fountain again being shut down… and now in the summer?
Where are we to go to enjoy such beauty now? Wish the city could help the public to enjoy the city.
A few years ago it was refurbished and should have lasted a long time, but just a few years is unreasonable. Lets get it turned on, please