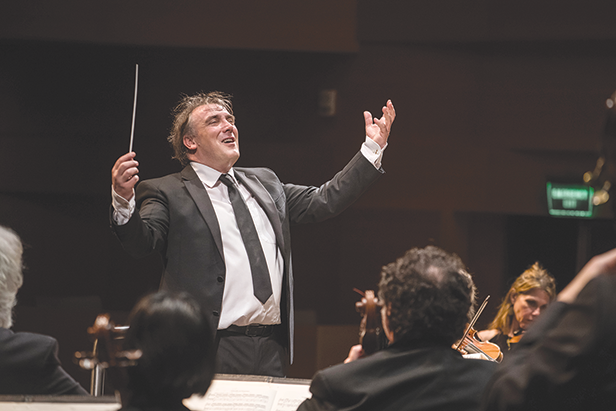 Jaime Martín has been contracted to remain as the music director of LACO through the 2026-27 season. (photo by Jamie Pham)

Jaime Martín, music director of Los Angeles Chamber Orchestra, received a five-year contract extension through the 2026-27 season, which was announced by board Chair Leslie Lassiter. Martín, who has quickly risen to worldwide attention as a conductor following a prominent career as a flutist, began his LACO tenure in the 2019-20 season, infusing the orchestra with tremendous musical creativity and forward momentum. He was also recently announced as taking the position of principal guest conductor of the Spanish National Orchestra in the 2022-23 season.

“During his short tenure with LACO, Jaime Martín has helped enhance the orchestra’s artistic profile in Los Angeles, as well as nationally and internationally,” Lassiter said. “His joyous music making, remarkable artistry, inclusive and bold programming and collegial leadership inspire both LACO audiences and musicians. We are delighted the orchestra’s musical trajectory will continue under his baton.”

“I am deeply honored to be a part of this iconic orchestra and grateful to LACO’s exceptional artists and dedicated board of directors for their confidence in my leadership,” Martín said. “It has been exhilarating to be a part of L.A.’s vibrant cultural scene and engage with LACO’s devoted audiences and community partners. I look forward to further exploring new musical frontiers with the orchestra and sharing our artistry.”

In concert reviews, the Los Angeles Times hailed Martín’s “infectious music making,” noting “the musicians seem to be having a blast. The audience is invited to the party.” Overseas, he has been praised as “a visionary conductor, discerning and meticulous” (Platea Magazine), and London’s The Telegraph said “his infectious enjoyment of the music communicated to the orchestra and audience alike.”