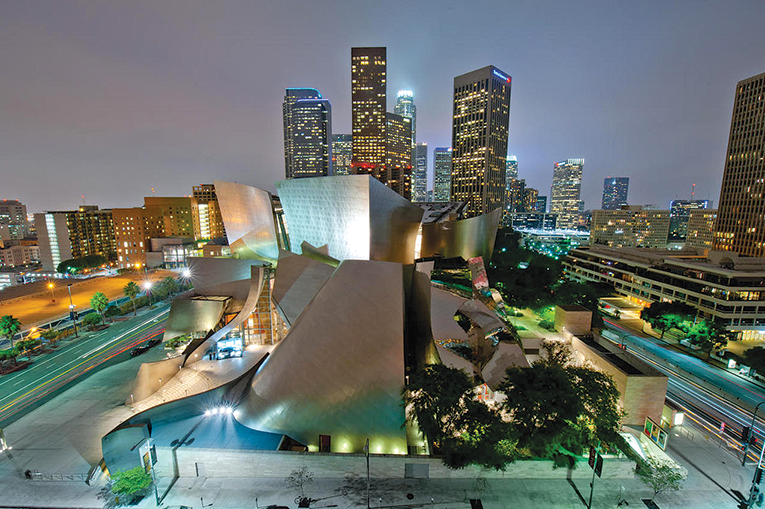 The Walt Disney Concert Hall will be filled with music this fall during the return of live concerts by the LA Phil. (photo courtesy of the LA Phil)

Los Angeles Philharmonic Music and Artistic Director Gustavo Dudamel and Chad Smith, CEO of the LA Phil, have announced the 2021/22 season at Walt Disney Concert Hall, signaling the resumption of live concerts at the venue after a 19-month closure due to the COVID-19 pandemic.

The upcoming season includes the multi-year Pan-American Music Initiative curated this season by composer Gabriela Ortiz; the “Power to the People!” festival organized by Dudamel and Creative Chair for Jazz Herbie Hancock; a multi-genre Gen X festival paying tribute to the generation (1965-1980) that gave rise to hip-hop, the riot grrrl movement, indie film and new concert music; “Reel Change: The New Era of Film Music” celebrating the wide-ranging influences of film music’s new generation of voices; a staged production of Beethoven’s “Fidelio” conducted by Dudamel; and the premieres of two dozen works commissioned by the LA Phil.

Other highlights include four concerts led by Thomas Wilkins, principal conductor of the Hollywood Bowl Orchestra, celebrating the orchestral music of Duke Ellington. Continuing a commitment to free digital content, Sound/Stage season three, an online series of concerts, will feature nine episodes highlighting programming during the season, with further details to be announced.

“Over this past year, the pandemic has isolated us from one another, and so as we celebrate our return to Walt Disney Concert Hall, we want to remember all that unites us and all that is best in us,” Dudamel said. “This season, we will blend different musical traditions, bridge geographical borders and build new connections among cultures, communities, audiences and artists. Whether experiencing the overpowering message of freedom in Beethoven’s ‘Fidelio,’ moving to the rhythms of Ginastera, Villa-Lobos and Revueltas in the Pan-American Music Initiative or feeling the passionate urgency of change in ‘Power to the People!,’ this season is about coming together and once again sharing the beauty of life with each other.”

The 2021/22 season kicks off on Saturday, Oct. 9, with the LA Phil’s annual celebratory fundraiser. Dudamel will lead the orchestra in a homecoming-themed program including the world premiere of an LA Phil commissioned work for orchestra by Ortiz.

Dudamel will conduct many programs including Schoenberg’s “Transfigured Night” and Strauss’ “Death and Transfiguration,” the world premiere of Thomas Adès’ “Dante,” two world premieres by Ortiz, programs for the Pan-American Music Initiative pairing Stravinsky’s major ballet scores with ballet and film scores by Ginastera, Villa-Lobos and Revueltas, and the season-capping “Power to the People!” festival including the LA Phil commission of a new work for orchestra by Angélica Negrón along with William Grant Still’s Symphony No. 1, “Afro-American.”

“While Gustavo and the orchestra have continued to connect with audiences online and at the Hollywood Bowl, their return to the Walt Disney Concert Hall stage is a special kind of homecoming, added Smith who serves as the LA Phil’s David C. Bohnett chief executive officer chairman. “It’s a moment we’ve been waiting for since the start of the pandemic, and Gustavo has put together an extraordinary lineup of programs that invite us to return to live music and to one another.”

Sales of season subscription series tickets have opened and single tickets will go on sale on Sept. 1. For information, visit laphil.org.

Exhibit of sewn art pieces opens for viewing at PDC