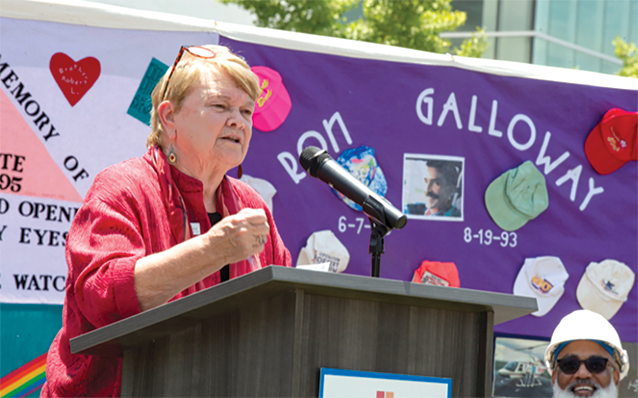 Earlier this month, the Foundation for the AIDS Monument held a private groundbreaking event for Stories: The AIDS Monument to commemorate the 40th anniversary of the first Centers for Disease Control and Prevention report related to AIDS.

Los Angeles County Supervisor Sheila Kuehl, 3rd District, said it was “a humbling and inspirational experience to be a part” of the groundbreaking.

“In 1981, a young immunologist, Dr. Michael Gottlieb, working at the UCLA Medical Center, noticed an unusual strain of pneumonia among gay men at the hospital,” Kuehl said in a statement. “That date is widely accepted as the discovery of HIV, though the virus had likely been around for decades before. Since its discovery, a reported 35 million people have died from AIDS.

“A deafening silence from those in power magnified the gut-wrenching losses in the early days of the epidemic, a reflection of an era when AIDS patients were stigmatized and discriminated against due to rampant misinformation and bigotry,” she said. “It was a dark, heartbreaking time, particularly for the LGBTQ+ community, who found themselves contending with the disease and the accompanying unimaginable grief, often without support, due to shameful federal inaction. But we refused to let our loved ones who died or survived be forgotten, and that indomitable spirit is behind this forthcoming monument.

“This monument will honor and memorialize those lost to AIDS, as well as survivors and the many activists who fought for visibility, research, and cures by sharing their historic and important stories,” she said. “We will never forget them.”