Juvenile charged with murder of janitor at Park La Brea 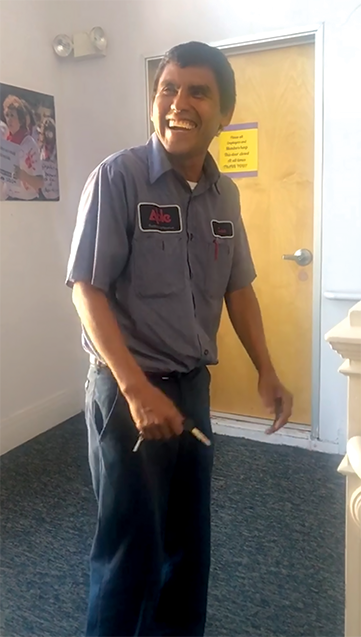 A GoFundMe account has been established for Jose Tomas Mejia, a janitor who was murdered at Park La Brea on June 16. (photo courtesy of Alejandra Valles)

Jose Tomas Mejia, a janitor at Park La Brea, was stabbed to death on June 16 while working in a tower at the residential complex.

Hours after the crime occurred, officers arrested a 17-year-old male suspect at a nearby hospital, police said. Investigators have released a few details but have mostly remained tight-lipped about the homicide because the alleged suspect is a juvenile.

Detective Sean Kinchla, with the Los Angeles Police Department’s West Bureau Homicide Unit, confirmed the suspect is in custody and is facing a murder charge. The suspect’s name has not been released because of his age. Kinchla said the suspect knew someone who lived in an apartment in Tower 33 in the 300 block of Burnside Avenue and arrived around 2:30 p.m. on June 16.

“He had a dispute with the resident and came to the location to harm the resident,” Kinchla said. “During an altercation, a maintenance worker was killed.”

Representatives of Park La Brea did not return requests for comment. The complex is gated and visitors must pass through security checkpoints and be let inside by guards. Security patrols the complex 24 hours.

Alejandra Valles, a member of the SEIU United Service Workers West Union and a friend of the Mejia family, has established a GoFundMe account to help Mejia’s wife and three teenage sons. 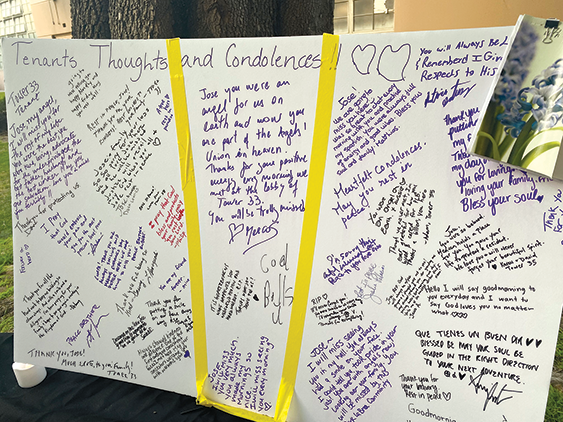 A GoFundMe account has been established for Jose Tomas Mejia, a janitor who was murdered at Park La Brea on June 16. (photo courtesy of Alejandra Valles)

Valles said based on information conveyed to Mejia’s family by police, the suspect was involved in a domestic violence incident with an individual living in the apartment. When he couldn’t get in the unit, the suspect found Mejia, 50, working nearby and tried to force him to give him keys to the apartment, Valles said. A confrontation ensued and Mejia was stabbed, she said. His body was found in a stairwell in the building, according to the Los Angeles County Office of Medical Examiner-Coroner.

Valles said Mejia was a fellow member of the SEIU United Service Workers West Union and worked for Able Services, with whom Park La Brea contracts for janitorial services. Mejia had been assigned by Able Services to work at Park La Brea since March 2018, she added.

Valles said Mejia immigrated from El Salvador during the 1980s and had worked as a janitor for decades. He had recently bought a house in South Los Angeles, where he lived with his wife and three sons.

Valles said Mejia was also a member of Justice for Janitors, an organization that fights for better rights and working conditions for maintenance employees. Mejia had previously taken part in rallies for safer working conditions, she said. Valles added that janitors, maids and other maintenance workers are often targeted for robberies and sexual assaults because they frequently work alone, and Mejia helped disseminate information to others about protecting themselves.

“It’s ironic and unfortunate because Tomas was an advocate for other janitors, was a peer-to-peer counselor in the janitorial industry. He had received training in self-defense and how to intervene in situations of sexual violence and domestic violence,” Valles said. “Ironically, he died after being inadvertently wrapped up in a domestic violence incident. That was very heartbreaking for me.”

Valles said many residents of Tower 33 knew Mejia and were upset by the crime. A card with messages paying tribute to Mejia has been placed near the tower.

“He was a hero. He died trying to protect someone else. It’s just tragic,” Valles said. “We raised enough money for the funeral, but we hope more people will help. We are trying to help the family stay in their home.”

To donate to the GoFundMe account, visit gf.me/v/c/pxd/4mk2qt-please-help-the-family-of-tomas-mejia. The LAPD’s West Bureau Homicide Unit is investigating the crime. Anyone with further information is urged to call detectives at (213)382-9470.

O’Farrell throws hat in the ring for final term

Thanks for covering this. We are all very saddened here. Interesting you mentioned that the community is gated & requires passes to enter – it seems to be the experience of many residents (I am one) that security has dramatically declined over the past few years. We’re working to get PLB management to pay attention to these issues.

Security to enter the property only applies to driving a vehicle. Anyone can walk in through on the sidewalk from both 3rd Street and 6th Street, and can walk onto the property behind a vehicle at any gated entrance without being challenged.

What happened most recently is sad and very tragic and glad to see the individual responsible for the 50 year oldest senseless murder caught and arrested! The victim didn’t deserve this and I hope the suspect never walks again!

The janitors should be armed and trained on how to protect themselves from the street thugs in the area.

This rips my heart. Another life lost to an out of control deranged young man probably addicted to drugs.