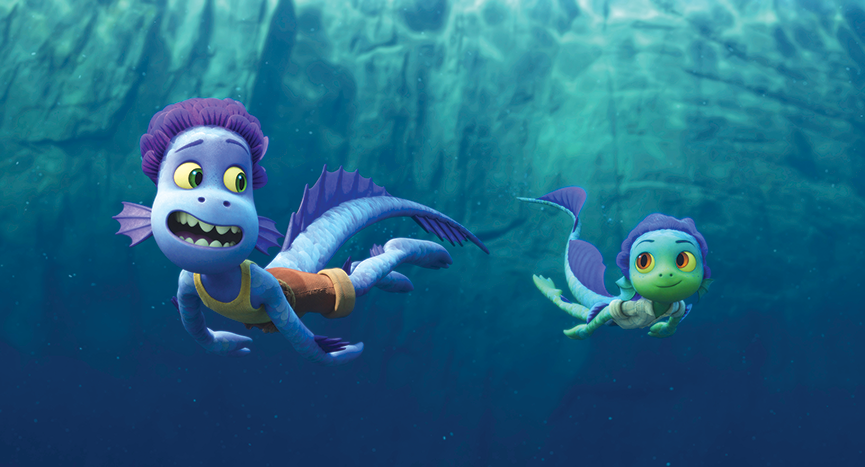 With few exceptions, mid-range Pixar still delivers something watchable, but “Luca,” a modernized fairy tale about a couple sea monsters surfacing to mingle with humans in a sea-side Italian town, leads that middle pack. It might not make the top 10, but that hardly undoes the many joys and boat loads of creativity flowing through each scene of this modest port-side romp.

Young Luca (Jacob Tremblay) spends most days herding his sheep-like fish with little knowledge of the “land monsters,” as the underwater locals call them, who reside on the nearby Italian Riviera. Fearing for Luca’s safety, his mom Daniela (Maya Rudolph from “The Room”) answers any and all questions about the surface with warnings of impending doom, which might quell outright dissent but do little to curb general curiosity. And when Luca meets Alberto (Jack Dylan Grazer from “Shazam”), the fish herder learns all of his species have a unique ability: they transform into human form during days on dry land – just don’t get wet at all.

Pixar’s team shines brightest with these moments of transformation amidst various contexts, like adventurous bliss as the pair jump out of water briefly morphing and submerging in the ocean once more. The most chilling sequences in the third act exploit this to great effect.

Back to the story, Luca and Alberto quickly become friends, bonding over a shared interest in Vespas. They eventually brave the town of Portorosso, enjoying all the charms of mid-century port culture. Alas, the joys of gelato and two-wheel transportation come with an extra serving of superstitions regarding elusive sea creatures.

“Luca” greatly concerns itself with how the populace reacts to the unknown – namely befriend or snuff out – but one character exemplifies humanity’s absolute worst traits: town bully Ercole Visconti (Saverio Raimondo). Without a single redeeming quality – and excessively obnoxious – he almost undoes the film. His vitriol hijacks every scene, making subsequent viewings a touch difficult to stomach.

But he doesn’t arrive for a while, and a host of other much better characters receive more screen time. Luca and Alberto’s evolving friendship leads the show, complete with antics around building their own Vespa, culture shock as they terribly, naively attempt human lingo and the challenges that arise when opposite personalities clash.

Above the water, only two endearing humans subvert the sea-monster-killing townie. Giulia (Emma Berman), believing Luca and Albie are runaway boys, befriends the pair, recruiting them to train for a rather unique triathlon including swimming, eating a to-be-determined pasta dish and cycling (Giulia had a reputation for evacuating the food portion in the last lap). Their primary challenge: nobody can beat Ercole, who continues to compete long past the maximum age restriction.

And then there’s her father Massimo (Marco Barricelli), an underused character whose external veneer juxtaposes his even larger heart. Beside the land dwellers, Rudolph’s Daniela and Jim Gaffigan’s Lorenzo, Luca’s father, complement each other well as they search for their song in unfamiliar terrain. 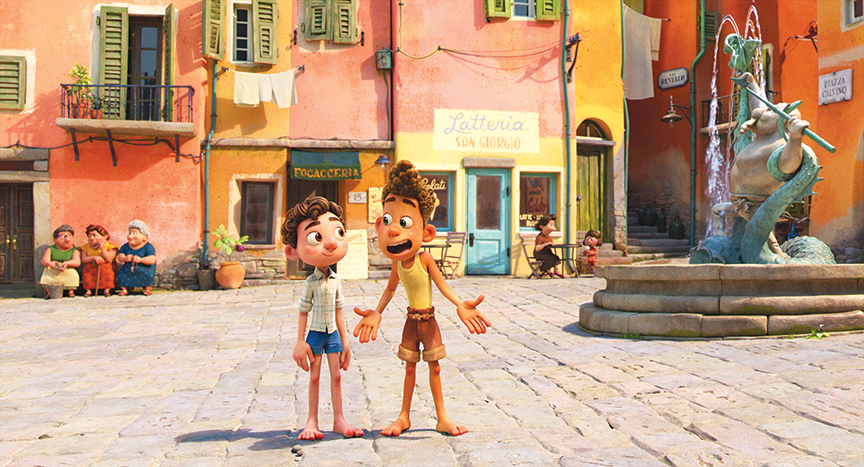 Luca and Alberto also transcend the barrier between land and sea and appear in human form in “Luca.” (photo courtesy of Disney)

One standout is “Luca’s” 2D-inspired animation, which is immediately shocking from a studio with an eye forward. Sure, DreamWorks Animation fancies a sea of visual diversity – Sony too, of late – but Pixar’s house style is as familiar as classic Disney princess fare. But “Luca” sports this illustrated throwback with ease, coming to life in both remarkable character design and a series of surrealist day dreams during which the young protagonist imagines all the wonders of the world, from traveling the globe to a flight around the solar system.

Accompanying this visual adventure is a memorable score by Dan Romer (“Beasts of the Southern Wild,” CW’s “Superman and Lois”). His work mostly dances between regional sounds and inquisitive accents, but the emotional punches, especially at the end, last well past the credits.

Pixar films work best when they successfully land in the sweet spot, appealing to children and adults. Think “Wall-E,” “Up,” “Inside Out.” “Luca” dabbles in both, but mostly keeps things light until the final revelations, which roll out too simply, too quickly, relying on melodramatic dismissal of logic. And moments later, it goes for the gut quite effectively.

Regardless of tonal inconsistencies, “Luca” is an easy view regardless of age that blends the fish-out-of-water and coming-of-age journeys into something both familiar and original – what Pixar does best.