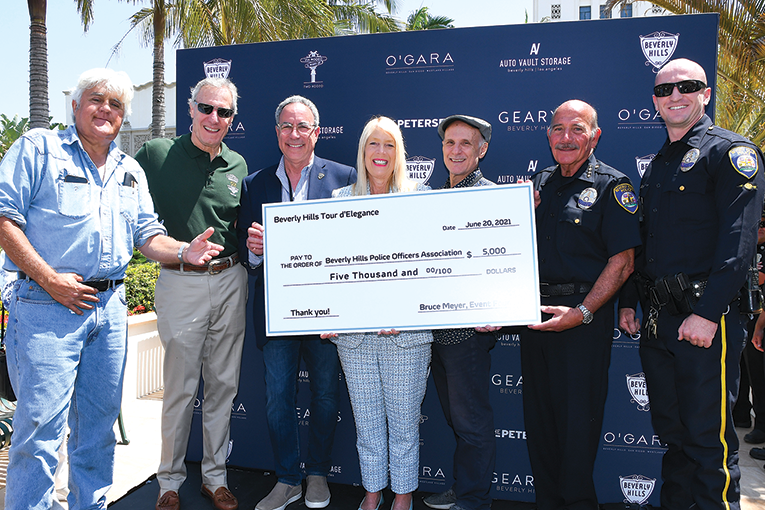 The inaugural Beverly Hills Tour d’Elegance, a special event organized by the team behind the Rodeo Drive Concours d’Elegance, welcomed 50 exotic and collectible cars to the streets of Beverly Hills on Father’s Day, June 20. This never-before-seen moving display of automotive art saw enthusiasts, families and lucky dads line the sidewalks of Beverly Hills to witness iconic cars from marques like Maserati, Ferrari, Bugatti, McLaren and Bentley, as well as a host of movie cars, art cars and more. The celebrated Rodeo Drive Concours, a Father’s Day tradition for over 25 years, will return in 2022.

“We couldn’t be more pleased with the turnout for the first-ever Beverly Hills Tour d’Elegance,” event founder Bruce Meyer said. “I would call the display of cars ‘show-stopping,’ but for the first time in the Rodeo Drive Concours d’Elegance’s 25-year history, the show was moving. The tour allowed us to find a socially distanced alternative to the much-loved concours and reconnect with the community after an incredibly trying year, all while supporting our local first responders.”

The special event benefited both the Beverly Hills Police Officers Association and the Beverly Hills Firefighters’ Association, nonprofit charities that provide assistance to first responders injured in the line of duty, maintain scholarship funds for their children and provide other support.

O’Gara Coach, the Beverly Hills dealer for McLaren, Aston Martin, Bentley, Bugatti, Koenigsegg, Lamborghini, Maserati, Alfa Romeo, Rolls-Royce and Genesis, led the tour from its start at the Petersen Automotive Museum to its end at the Beverly Hills City Hall. Limited-run hypercars like O’Gara’s McLaren Speedtail and Lamborghini Siánguided paraded down famed city streets to the delight of spectators.