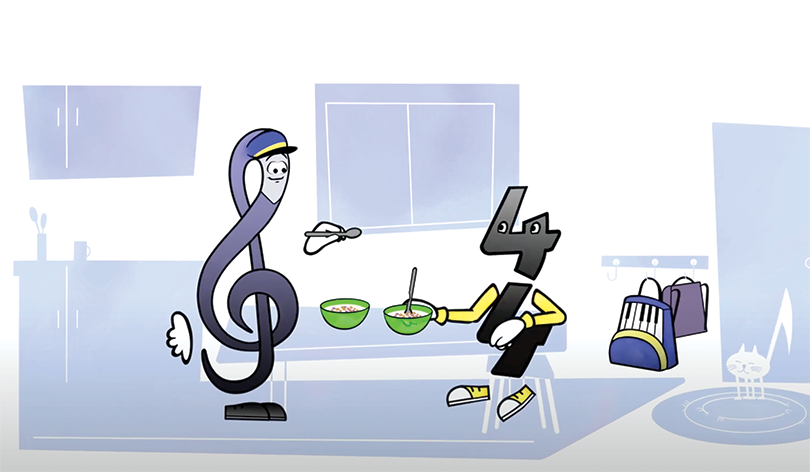 An educational video uses fun characters to teach kindergartners about the intricacies of music. (photo courtesy of the Herbie Hancock Institute of Jazz)

The collaboration between the 14-time Grammy and Academy Award-winning pianist and composer, along with an award-winning team of animators the first in a series of animated videos showcasing innovative methods for educating kindergarteners has been released.

Titled “Treble Leads the Class,” the newly-released video is part of a supplemental curriculum developed by the Young Academic Research Group at the Touro Graduate School of Education in New York City that uses the power of music to help kindergarteners learn about numeracy, problem-solving and computational thinking.

YAM is an early phase education and research program led by professors Susan Courey, Timothy Bellavia and Roslyn Haber, and funded through a $1.4 million grant from the U.S. Department of Education.

Hancock, who is chairman of the Herbie Hancock Institute of Jazz, an adjunct professor at the UCLA Herb Alpert School of Music and a UNESCO goodwill ambassador for intercultural dialogue, narrates the video.

“I’m thrilled to be able to create new ways for children to learn about music,” Hancock said. “I hope this video and the others to come will help instill a sense of fun and musical inspiration for kids around the world.”

“Treble Leads the Class” tells the tale of characters Treble Clef and his best friend Four-Four Signature. Treble, like many young children, battles nerves and anxiety when talking with others. When he is chosen to lead his classmates during a day at school, Treble is challenged with facing his fears. Thankfully, his friend Four-Four is there to keep him calm.

For information, visit hancockinstitute.org. To watch the video, visit youtube.com/watch?v=ZmEkWFgseo0.