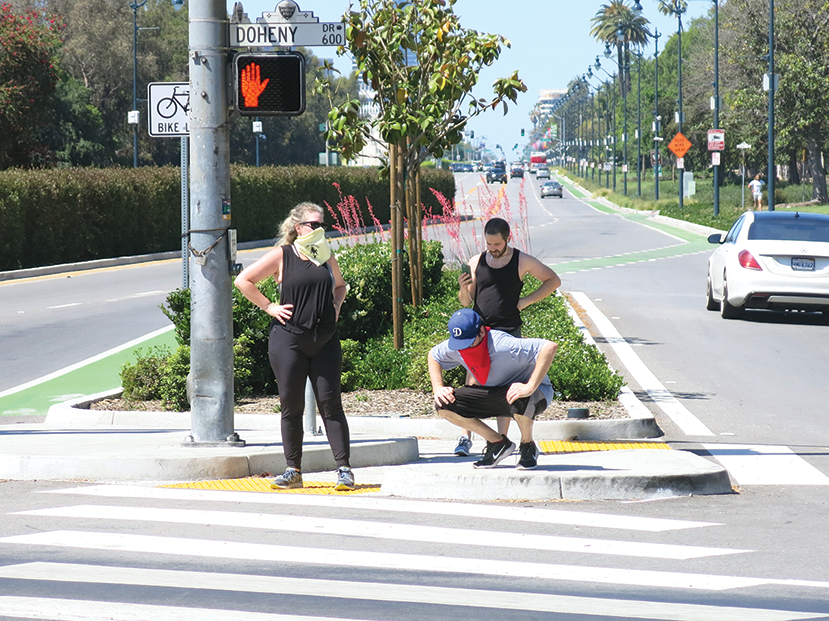 While masks are no longer required outdoors in Beverly Hills, they continue to be required in places where children, who cannot yet be vaccinated, are likely to be present. (photo by Cameron Kiszla)

After more than a year of virtual City Council meetings, Beverly Hills took the first steps toward resuming in-person events on June 24.

The council discussed the resumption of public meetings in the council chambers, which they are ready to start “as soon as possible,” as Councilman John Mirisch said.

“I really don’t see any reason why we shouldn’t do it as soon as practical in terms of having everything set up and ready to go,” Councilman Lester Friedman said. “If that’s the first meeting in July or the second meeting in July or whenever, there’s no reason in my mind to delay any further.”

The need for a relatively quick timetable for a return to in-person meetings is being reinforced by the September expiration of pandemic-related exemptions to the Brown Act, which regulates public access to local government meetings, meaning the council must resume meeting in-person by then, City Attorney Laurence Wiener said.

“As of September, at least some members of the council would have to be at City Hall, and you’d have to allow the public to come to City Hall,” Wiener said.

The council members said they’d be open to allowing a hybrid model to continue, where members of the public and city staff – and potentially, some council members – could participate virtually.

The council also decided to align city requirements with those at the county and state level, such as the requirement that only those who have not been vaccinated must wear masks indoors.

“As they relax restrictions, we should too. I don’t think we should be in the business of creating new rules. It would be confusing,” Gold said.

The council members made clear, however, that for those who did choose to attend council meetings in person, it would be their responsibility to ensure that they are not spreading COVID-19, influenza or even a cold.

“I do think it’s worth our while to at least be as direct with people who enter our premises as we can … Candidly, it’s on people to behave correctly,” Gold said.

“People lie … I’m sure there are people who just [go without a mask, despite not being vaccinated] and I’m not sure that we can enforce that,” Vice Mayor Lili Bosse added.

The council also amended some of the COVID-19-related regulations that the city passed when the pandemic shutdowns began in March 2020. Among the items removed from the city’s pandemic-related ordinance were social-distancing requirements for people waiting in lines; a prohibition on selling self-service unwrapped food, such as buffets; and a prohibition on using non-recyclable bags at stores.

One item that was also removed, a prohibition on an increase in internet access fees, drew some discussion among the council members, as Mirisch and Bosse wanted to see that prohibition remain in place.

“People now need internet even more than ever to work,” Mirisch said.

Internet prices, however, are not set at the local level, so the other three council members declined to leave that regulation in place.

“The internet is actually regulated by the federal government,” Wiener said.

More COVID-19-related items will be considered on July 15, when topics such as the cap on fees imposed by third-party delivery companies, suspension of penalties and interest on business taxes and the eviction moratorium will be discussed.