A fine Fellow in Westwood 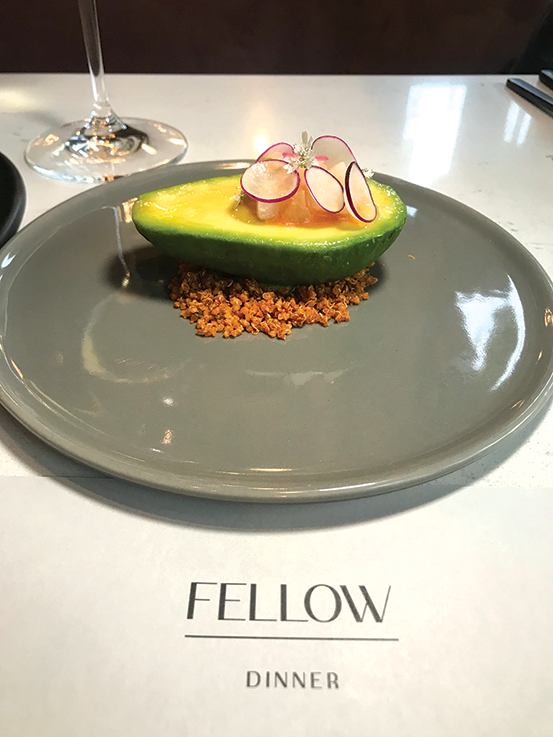 The first time I dined at Philip Camino’s restaurant, Fellow in Westwood, was in 2017. It was a fun pre-theater dining spot before a night at the Geffen Playhouse or sporting event at UCLA.

When I learned the restaurant recently reopened their dining room, my husband and I made a reservation. We discovered there have been some big changes at Fellow since the last time we dined.

Camino leased the space adjacent to his restaurant and now has an art gallery and event space. Diners enter through the Galerie door where they are greeted by the host and led into the restaurant, which features a soaring ceiling.

Large art pieces hang on the walls, and the booths are upholstered in a light purple soft velvet, adding a modern design to the interior while staying true to the original elements found in the historic building and neighborhood.

Camino also hired chef Chris Flint to take over the kitchen. After helping Eleven Madison Park in New York win three Michelin stars, Flint was part of the team to garner another Michelin star award at NoMad New York before coming to Los Angeles to help open NoMad in downtown L.A. in 2018.

Flint then worked in the kitchen at Curtis Stone’s Maude before the pandemic. He has elevated and refined the Fellow menu into visually appealing edible art on a plate. Sommelier and Director of Operations Scott Lester, a level three sommelier, presents a curated cellar with more than 2,000 bottles of wine from more than 350 producers with a focus on classic California growing regions. Lester was formerly with the French Laundry, the Restaurant at Meadowood and also an Eleven Madison Park alum.

Sitting at a booth next to a large glass window looking out to Glendon Avenue, our friendly server Joey introduced two menus. The dinner menu offers a selection of appetizers, entrées and desserts, and a water menu featuring bottled waters from around the world. Guests can order bottles of still water from France, Fiji, the U.K., Denmark, Finland, New Zealand and Norway. Fellow may be the only restaurant in Los Angeles where you can order a bottle of sparkling water from Romania, Spain and Italy.

The cocktail menu is from bar director Adam Fournier, who is also formerly of NoMad and was named 2021 U.S. World Class Bartender of the Year by USBG and Diageo. Camino has quite a team now.

I recognized the professional and affable General Manager Charles Hueston when he stopped at our table to greet us. He was the GM at BOA Steakhouse in Santa Monica and is now running Fellow smoothly, along with Assistant General Manager Rachel Cambon, formerly of Rustic Canyon Group. 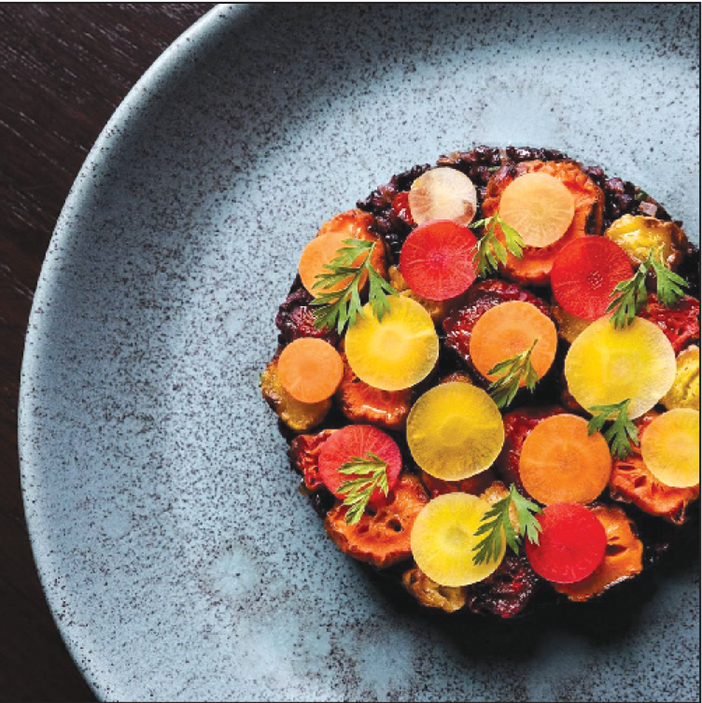 Looking over the chef-driven à la carte dinner menu, we decided to order the scallop ceviche on half of an avocado with radish and jalapeños. Flint halves a perfectly ripe avocado and places it on top of a crumble of dehydrated scallops, salt and spices. He bathes fresh scallops in Leche de Tigre and tops them with equal sized thinly cut radishes that curl to look like flowers. It’s finished with a few white edible microflowers. We were wowed with each bite and commented how the cuisine is much different than the pre-pandemic casual Fellow.

The second appetizer we ordered was the fennel salad with bright orange citrus slices, red onion and a simple, yet so flavorful, olive oil and aged goat cheese dressing.

Other fine dining appetizers include foie gras with strawberries, tortellini of cauliflower with pine nuts, and hamachi crudo with a ponzu dressing.

Looking over the five entrees, we selected the glazed lobster tail on a turnip mash that was enhanced with vanilla. With an artistic flair, there were curled turnip slices and microleaves framing the lobster.

The seared duck was served on a charcoal-colored plate featuring two thick slices of duck with an artistic pop of red from roasted whole beets, a raspberry sauce and fresh raspberries. A few green nasturtium leaves on top added to the visual presentation.

My favorite dish was a vegetarian roasted carrots with black rice and mushrooms. Chef Flint uses forbidden black rice and shapes it into a perfect sphere. On top, he decorates the black rice canvas with rainbow-colored carrot medallions. Thinly sliced mushrooms and a few microgreens finish this simple, yet so flavorful, dish.

For dessert there are three choices, including gluten-free chocolate butter mochi cake with dulce de leche and sesame, and a pistachio cake with cherries and brittle. Flint  came out with both desserts and shared his plans for an upcoming tasting menu. He is excited for the Geffen Playhouse to open soon, and for UCLA to welcome back students and their parents at the end of the summer.

Fellow is a new fine dining place to meet friends in Westwood. The visual art on the walls and picturesque food on the plates appeal to all of your senses.