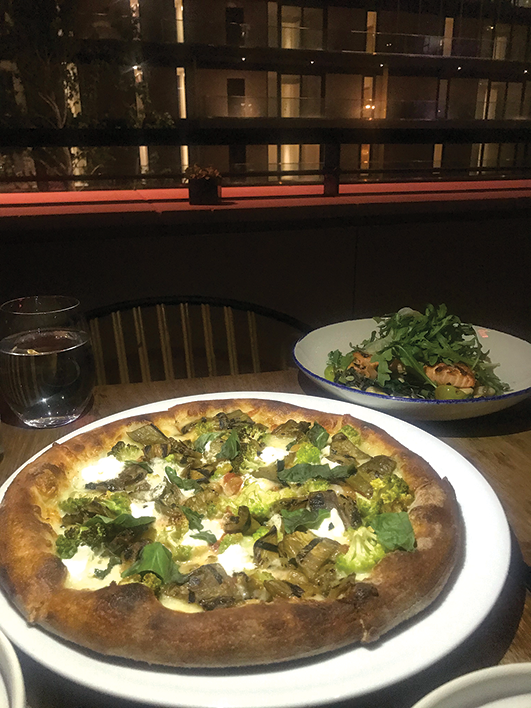 Wolfgang Puck bakes a variety of his famous pizzas fresh in his wood-fired oven at Ospero. (photo by Jill Weinlein)

Located at the former House of Blues site on the Sunset Strip, Wolfgang Puck recently opened his new all-day restaurant Ospero at the new boutique hotel, Pendry West Hollywood. The entrance is at street level, looking out to the Comedy Store, and is within blocks of his first Spago restaurant that he opened in 1982.

It’s been over 10 years since Puck, one of L.A.’s most famous chefs, has opened a restaurant. Puck became a household name for his award-season dinner parties, one-of-a-kind restaurants around the world, popular airport eateries and a line of culinary delights available at grocery stores.

Sit outside in the afternoon and watch the people and cars go by on Sunset Boulevard. In the evening, if you seek a quieter spot, ask to sit at the back of the restaurant on the al fresco dining terrace. The twinkling lights of the residences at the Pendry and views of greater Los Angeles are beautiful.

At Ospero there is a long dark blue bar and an open pizza kitchen. The low, soft leather teal-colored chairs resting on the Saltillo tile floor create an Italian trattoria feel.

We sat at a table for two at one of the coveted green velvet banquette tables and opened the dinner menu on our smartphones. Ospero features some neighborhood-friendly favorites that Puck made so popular during his days at Spago. There are iconic and innovative salads, pastas and wood-burning pizzas. Ospero also offers vegan dishes, proteins, a really good burger, breakfast favorites, grab-and-go items and a full bar.

We started with Puck’s chopped Chino Farm vegetable salad that our server had the kitchen split into two bowls. It was a generous portion of chopped lettuce with a variety of crunchy cube-shaped vegetables dressed lightly with a balsamic vinaigrette and dusting of parmesan cheese shavings. The salad was very fresh, healthy-tasting and offered layers of pleasing flavors.

Other popular salads and share dishes include a grilled tuna niçoise salad with a soft-boiled egg and meatballs al forno, bathed in a tomato, garlic and basil sauce with whipped ricotta.

Puck’s signature smoked salmon pizza with dill cream and salmon pearls is on Ospero’s menu, along with five others, including a wild mushroom pizza that we ordered and enjoyed. It arrived with Puck’s famous crust, thick and perfectly browned by the wood fire. A generous sprinkling of mushrooms topped a basil pesto spread, and chopped roasted garlic, caramelized onions and melted cheese medallions finished off the pizza.

Other pizzas include a house made lamb sausage with Calabrian chiles, mushrooms and onions; a spicy chicken with melted leeks; and a squash blossom and goat cheese pizza.

There are four different pastas, including one named My Grandmother’s Cheese Ravioli, and fresh pappardelle with braised oxtail ragout and fava beans topped with pecorino cheese.

Those seeking grilled fish have a choice between Atlantic salmon served with a fresh arugula and fennel salad on top, or a tender wood oven cooked branzino served with a delicious gremolata and Tuscan kale.

The table next to us ordered the prime beef burger topped with melted white cheddar cheese, a slice of grilled red onion and garlic aioli spread on the bun which comes with fries.

Other proteins include a half Jidori chicken served with Tuscan potatoes and broccolini, and a grilled prime skirt steak served with rosemary and garlic fries.

Stay for dessert and order the creamy Basque cheesecake topped with a farmers market strawberry sauce. It is so ethereal, rich and is sliced large enough for two to share.

Executive chef Mark Andelbrandt oversees the kitchen with Puck and has enjoyed an extensive culinary resume with the Wolfgang Puck Fine Dining Group. Besides being the executive chef at Spago at the Bellagio Resort & Casino, he works alongside Puck to create one-of-a-kind globally influenced fare.

Now he is managing the kitchens at both Ospero and the more exclusive Merois, which offers stellar views from the Pendry’s penthouse level, creating a fine dining menu using French techniques with an Asian spin.

The night I dined at Ospero, Merois was just opening to hotel guests and private club members. I’ll have to save that experience for another night. Puck’s son, Byron Lazaroff-Puck, oversees both of these restaurants.