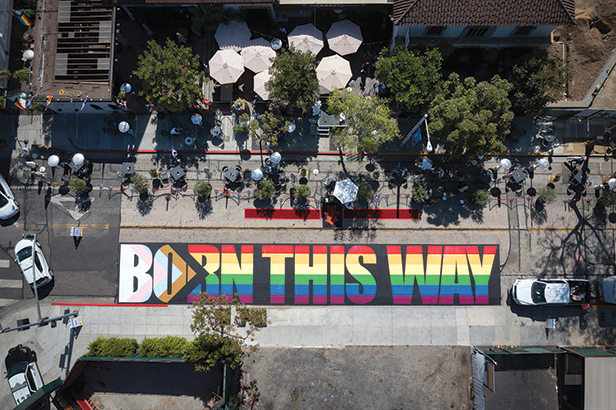 A temporary “Born This Way” street-lane installation has been installed on Robertson Boulevard to honor Lady Gaga. (photo by Jon Viscott/courtesy of the city of West Hollywood)

Each year, the city of West Hollywood celebrates the artistic contributions of the LGBTQ community with its vibrant 40-day-long One City One Pride LGBTQ Arts Festival. The festival kicked-off on Harvey Milk Day, May 22, and runs through June 30, which marks the end of Pride month.

This year, to recognize Harvey Milk Day-weekend with something extra, West Hollywood conferred two special proclamations officially declaring May 23, as “Born This Way Day” to honor Lady Gaga and the Born This Way Foundation on the 10th anniversary of the iconic “Born This Way” album, and officially declaring the day as “The Abbey Day” on the occasion of celebrating The Abbey Food & Bar’s 30 years of success. Proclamations marking these official declarations were presented by Mayor Lindsey Horvath to Lady Gaga and to David Cooley, owner of the Abbey, respectively, on behalf of the City Council. Horvath also presented a key to the city to Lady Gaga with a note of thanks: “Thank you for encouraging us to love ourselves and be proud!”

Lady Gaga, the Grammy- and Oscar -winning superstar and pop icon, is also well known as a supporter and ally of the LGBTQ community. Ten years ago, on May 23, 2011, the “Born This Way” album was released and its lead single became an LGBTQ anthem. The song has encouraged people of all sexual orientations, genders, ages and races to accept themselves and others, and to embrace differences, reject prejudices and feel empowered.

“Through her music and activism, Lady Gaga has become a cultural icon for our generation,” Horvath said. “The anthem ‘Born This Way’ has become an out-and-proud declarative stance for countless LGBTQ people. The Born This Way Foundation fosters honest conversations about mental health with young people and seeks to eradicate the stigma around mental health struggles.”

The Abbey Food & Bar opened in West Hollywood in 1991. Since then, it has become a social and cultural epicenter for the local LGBTQ community. Thirty years ago, Cooley, founder and owner of the Abbey, invested in a small, discreet space in West Hollywood that he renovated into a coffeehouse. During three decades, the Abbey has expanded five times, growing from a humble coffee shop to a 16,000-square-foot venue with multiple rooms, four bars and a full menu.

“David Cooley and the Abbey have made an indelible impact on West Hollywood,” Horvath said. “The Abbey is as much a community hub as it is a global destination. It generously gives back by supporting dozens of LGBTQ and nonprofit groups, including regularly hosting events to support local organizations. We are so lucky to have the Abbey in our community and I’m thrilled to celebrate its 30 years of success.”

Hydrogen should get more consideration as fuel source