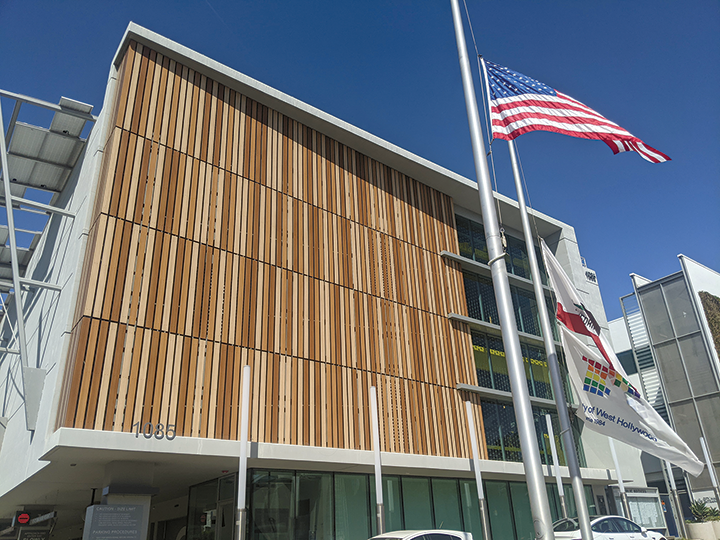 The city of West Hollywood is drafting an ordinance that would require all multi-stall bathrooms to be gender-neutral in any new developments. (photo by Justin Sayers)

The West Hollywood City Council unanimously voted on May 3 to draft an ordinance that would require all multi-stall bathroom facilities in businesses and places of public accommodation to be gender-neutral.

The motion, which was sponsored by Councilwoman Sepi Shyne and Councilman John Erickson, directs city staff and the city attorney to draft the ordinance, which would apply to new developments as well as significant remodels and new commercial leases.

For Shyne, she said that the topic is a priority for her to “have true inclusivity for our community members.” She said that she was inspired to introduce the item after touring a new city recreation building with a gymnasium and auditorium, where the single-stall bathrooms were located downstairs.

“To me that was just a complete injustice given that we’re building such an incredible building and we have our transgender community who are part of so many sports that are played – this really precipitated putting this forward,” Shyne said.

The item generated a swath of public feedback, with about a dozen callers during the public comment portion of the meeting and more than 20 additional responses submitted electronically prior to the meeting. The vast majority of respondents supported the item, with those opposed expressing concern about public safety.

The ordinance prompted a letter of support from Equality California, a nonprofit organization that advocates for LGBT people and is the largest LGBT organization in the United States.

“This is an opportunity to send a powerful message of support for and solidarity with transgender people in West Hollywood and beyond at a time when lawmakers across the country attempt to restrict and roll back their rights,” Executive Director Rick Chavez Zbur said. “We respectfully urge the council to vote yes on the motion, and we thank council members Erickson and Shyne for their leadership on this important issue.”

The West Hollywood ordinance would protect transgender and gender non-conforming people from harassment; accommodate those with special needs, including families with children who are too young to use the bathroom; would use space more efficiently; and decrease waiting time for the restroom, according to the memo.

Staff noted that there have been several examples of successful gender-neutral bathrooms in airports, universities, schools and restaurants across the country, providing examples from New York, Rhode Island and Minnesota. Design considerations for the bathrooms include full-height walls and doors to separate each stall, additional lighting and proper gender-neutral signage with inclusive imagery.

Councilman John D’Amico labeled the staff report as “super timely and incredibly thoughtful,” but said that he had concerns about how the bathrooms would be able to be constructed due to requirements under the California building and plumbing codes.

“If we pass this, we are asking architects and other engineers to design something that is not to the California building code with the assumption that our Planning Department would approve it if it became an ordinance,” he said, adding that he could also see potential concerns with requirements regarding the Americans with Disabilities Act, as well as other requirements, including changing tables for families.

“It’s a whole host of really great questions that nerds like me spend a whole morning thinking about,” he said.

Shyne, as well as Ben Galan, a building official with the city, said that they’ve looked into those concerns, and that they would be able to move forward with the multi-stall gender neutral bathrooms regardless of the codes. They added that there are proposed changes to the code, and that the city will lobby for those changes at the state level.

“I just want to make sure we are moving this forward and not waiting for the state,” Shyne said.

Councilwoman Lauren Meister asked if the ordinance would apply to places with pool facilities and gymnasiums that have showers, as well as what would happen with recently constructed city facilities that required significant financial investments.

Shyne said the ordinance would only solely apply for multi-stall bathrooms, and not facilities where there are showers, as well as stand-alone bathrooms that have sinks on the outside.

She stressed that it would only be for new developments and major renovations, but that she’d hope the city would update their facilities to reflect a new ordinance.

“We didn’t want to create too much of a burden on any existing buildings,” she said.