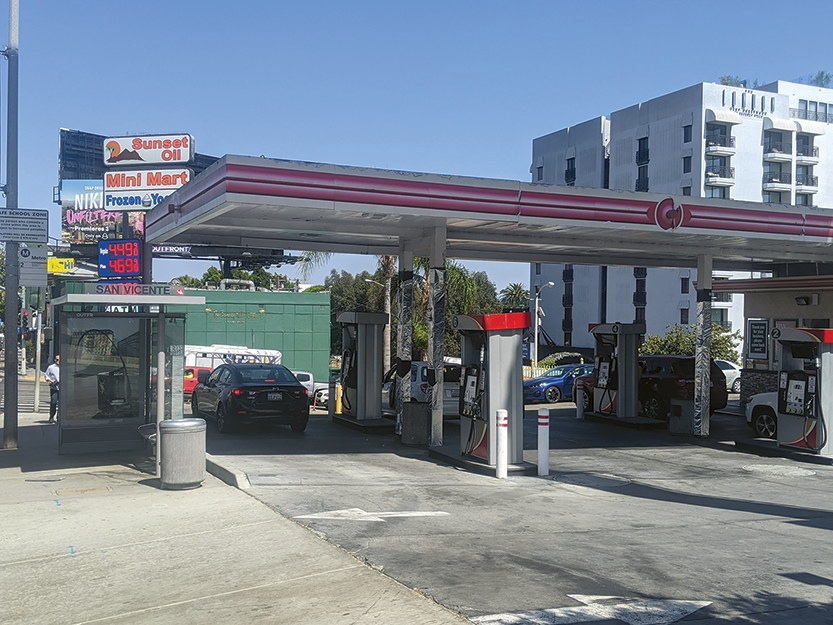 West Hollywood is considering banning new fossil fuel gas stations, a move that would make them the second city in California to do so as the state continues its move toward its goal of 100% zero-emission car sales by 2035.

The West Hollywood City Council unanimously voted last month to direct staff to evaluate the possible prohibition on new fossil fuel gas stations, and for any expansions of current gas stations to be limited to zero-emission vehicles.

The item, which was co-sponsored by Mayor Lindsey Horvath and Councilman John D’Amico, is the latest in a long line of city efforts to promote sustainability and zero-emissions vehicles. It also follows Petaluma, which passed a similar ordinance in February.

“We are often at the forefront of these conversations,” Horvath said. “We really thought that was the right example. We hope that we’re able to follow in that vein. I think not only is it smart for our clean energy future. It’s also not the best use for the land that exists in West Hollywood.”

D’Amico, who has driven an electric car for six years and has been an advocate for zero-emission vehicles, including attending conferences around the globe, said that he’s hoping the vehicles become a “regular part” of the city moving forward.

“Lindsey and I have long supported new regulations and opportunities around sustainability and around taking care of the environment and the ecology,” D’Amico said. “It seemed to us that now was the time to take the next step and stop new gas stations from showing up and the ones that we have, if they want to renovate, they have to put in some renewable energy system for powering cars.”

The council’s move comes months after Gov. Gavin Newson instituted an executive order that requires sales of all new passenger vehicles to be zero emission by 2035. The state has also set a goal to have 5 million electric cars on the roads by 2030 and 250,000 electric vehicle charging stations by 2025. The push is part of an effort to reduce the state’s carbon footprint and limit the effects of climate change.

West Hollywood city staff noted there are six gas stations within city boundaries, with several more in close proximity. There have been zero gas stations built in the city since it was incorporated in 1984.

“There are adequate gas stations to serve existing and future internal combustion vehicles to the extent they continue to exist,” the memo read. “West Hollywood has always strived to be on the forefront of combating climate change. Incentivizing businesses and the public to adopt electric vehicles is a crucial step.” 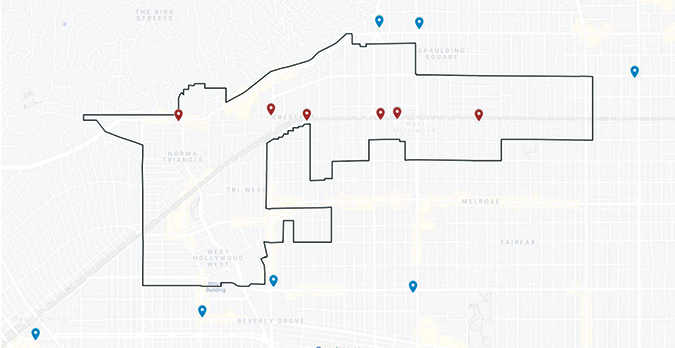 There are six gas stations in West Hollywood, with a handful more just outside city limits, leaving close-by options for those who continue to use vehicles powered by fossil fuels, city officials said. (map courtesy of city of West Hollywood)

Horvath said she feels the council’s actions can accommodate those who are interested in green vehicles, but may be on the fence due to limited charging stations or accessibility.

“We’ve been working together to make West Hollywood a place that embraces electric vehicles,” Horvath said. “So often we hear, ‘Well, I would think about it, but they’re really expensive, but I don’t know where I would charge my car.’ … We need to expand this infrastructure if we are serious about changing our possible modes of transportation and serious about getting to a clean energy future.”

Other sustainable efforts included giving residents a consumer choice in electric service that allows them to have the option for renewable power.

“Every resident that chooses to is now on the grid and is receiving 100% renewable power and is not contributing to climate change in at least that one way,” he said.