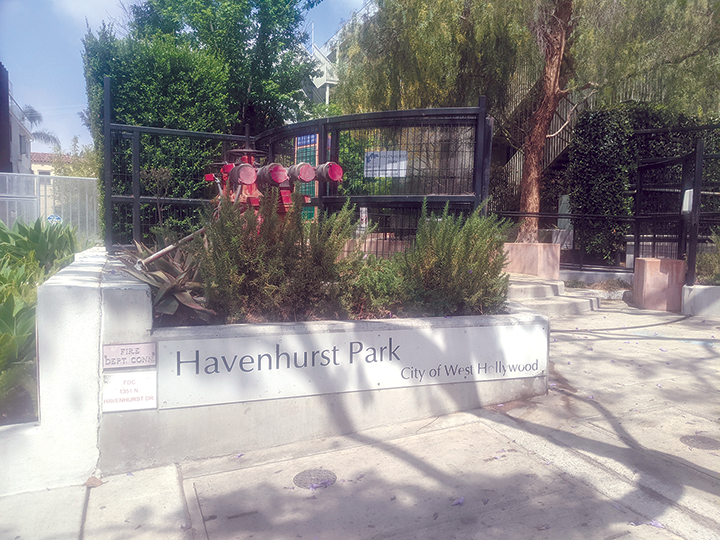 Havenhurst Park, a pocket park maintained by the city of West Hollywood, is similar to what is being proposed as part of the potential privately owned public spaces program. (photo by Justin Sayers)

The West Hollywood City Council voted this week to explore creating a program that would incentivize private property owners to open spaces like rooftop terraces and pocket parks to the public as part of an effort to create more green space as the city becomes more densely urban.

The council’s unanimous vote during the May 17 meeting allocates up to $7,500 in city funds to hold a symposium to educate the public and get feedback about the privately owned public spaces program. No specific details about the symposium had been released, as of May 19.

Councilwoman Lauren Meister, who co-initiated the proposal with Councilwoman Sepi Shyne, said during the meeting that the idea came from the city’s recent Green Week symposium, where they found that the majority of the city’s trees are in single-family neighborhoods or public parks.

“I think that the thought is, we want to contribute in a positive way to the environment,” Meister said. “We also want to look at this in a way to bring the community together.”

City officials noted in a memo that the program would help create open space in a densely urban city like West Hollywood, where the availability of open space is critical. Open space provides health and environmental benefits, helps build a sense of community and improves quality of life, staff said.

They pointed to similar programs in New York and San Francisco, as well as two pocket parks in West Hollywood – Formosa and Havenhurst parks – which differ slightly as they were paid for by private developers, but are maintained by the city. They also pointed to the fact that the city is looking for ways to provide more green space, especially in the wake of recent state law changes that allow for greater density and height in development projects.

As part of the program, private owners would own and maintain the spaces and keep them open to the public. The spaces would be required to be open for specific operating hours and be subject to regulations of the zoning ordinance or other land-use provisions. In exchange for providing the public spaces, the developer would be eligible for some types of incentives or waivers, such as a waiver for common open space requirements or a transfer of development rights from the public space part of the site to another part of the same development.

The proposal was met with a mixed reaction from both the public and other members of the council, who liked the idea but expressed concern about issues like public safety, upkeep, noise and confusion about some details in the project.

Councilman John Erickson said other areas have had some issues with homeless individuals, and he wanted to stress that the upkeep would not be handled by the city. Councilman John D’Amico said it would be helpful if the city came up with a specific definition for what a public space is to aid those who want to participate.

Mayor Lindsey Horvath asked Meister and Shyne to hold the symposium first before officially bringing the zone text amendment change to the city’s Planning Commission and back to council for approval, saying she wants it to be explored a little more to “get a little more clarity.”

“We’ve heard some concerns from the public that I think have been addressed by your comments in some way,” Horvath said. “I’m just wondering if we can do it in a step-by-step process.”

Shyne acknowledged the confusion, but stressed that the rooftop spaces would not apply to residentially zoned projects, only mixed-use and commercial projects, while pocket parks would be open to anyone. She also said that the spaces would only be developed if the property owners want it and would have limited hours.

Meister added that they’re envisioning these public spaces as “passive spaces,” but agreed to start with the symposium before on to specific changes.

“It really could be a lovely thing in the middle of a really exciting city to have these areas. … This is really about developing areas that people can enjoy and read a book, contemplate the vegetation – looking at it that way,” she said. “We don’t want to scare anybody. We aren’t trying to force this on anybody.”

Perhaps West Hollywood would be less “densely urban” if the city council didn’t approve every new megabuilding project that comes before it. The concept of “pocket parks” on private property would be superfluous.

Nice idea but what about liability? Seems to me that the property owner will have to pay higher insurance premiums due to the increased number of people who will be on the site during the open hours. More people mean more risks of accidents. Will need to create public and private sections, adding another burden to the owner. Security and safety of the resident/s will have to be addressed, too. Seems like a lot to ask for.