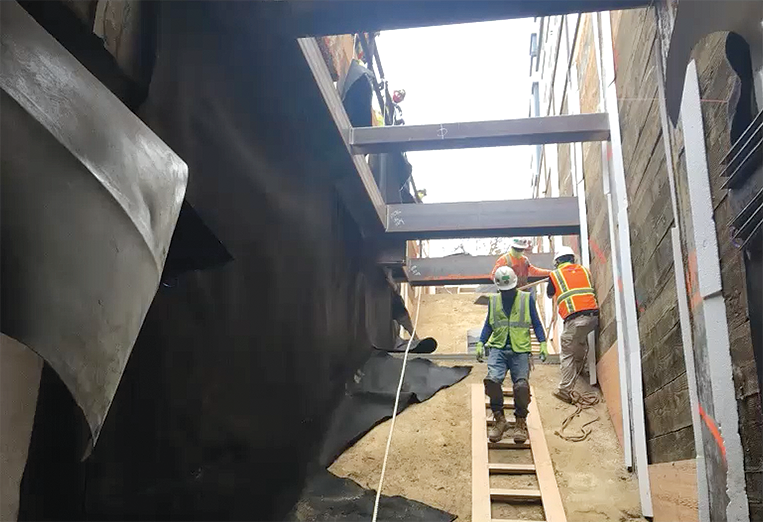 Crews are building entrances and exits at future subway stations along the Purple Line Extension route. (photo courtesy of Metro)

Metro will continue work on the Purple Line Extension subway project through the end of May and beginning of June. The next meeting on sections one and two of the project from Wilshire/Western to Century City will be held on Wednesday, June 2, from noon to 1 p.m., via Zoom. To participate, visit zoom.us and use the webinar ID: 937 0548 5587, or call (888)788 0099.

Construction may impact traffic at many locations along the route between the Wilshire/Western and Century City/Constellation stations. At the eastern end near Wilshire/Western, support for tunneling continues near Manhattan Place. K-rail work zones will remain on Wilshire Boulevard near Rimpau and Plymouth boulevards through 2021. Support for tunneling and cross passage construction continues in the area. Wilshire Boulevard has been reduced to two lanes in each direction between June Street and Muirfield Road, and Windsor and Plymouth boulevards.

Other station appendage work is occurring along the southwest corner of Wilshire Boulevard and Fairfax Avenue. Wilshire Boulevard will be reduced to two lanes in each direction between San Diego Way and Spaulding Avenue through early August.

Support for tunneling continues at the Century City/Constellation station. Traffic controls and lane reductions may be in place around work zones near Constellation Boulevard and Avenue of the Stars.

Metro pairs unclaimed bikes with those who need them