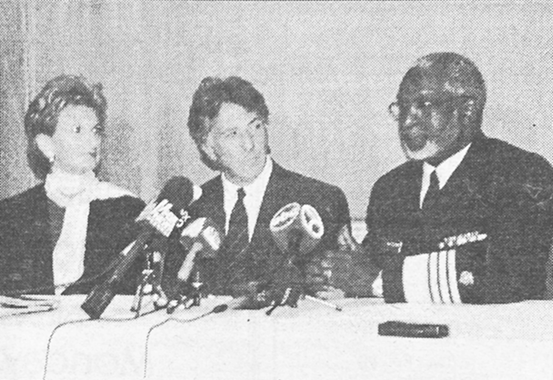 Former U.S. Surgeon General David Satcher, right, was shown in this photograph from the May 4, 2000, issue of the Beverly Press and Park Labrea News at a ceremony in Beverly Hills hosted by Didi Hirsch Mental Health Services. Satcher, who was joined by Nancy Hirsch Rubin, left, a Didi Hirsch board member and former U.S. ambassador to the United Nations Commission on Human Rights, and actor and mental health advocate Dustin Hoffman, discussed the stigma surrounding mental health disorders during National Mental Health Awareness Month in May. Satcher, who was appointed by former President Bill Clinton, said one out of five Americans suffered from some form of mental illness, which is still the case today, according to the National Institute of Mental Health. Didi Hirsch offers many services and resources for adults, children and families suffering from mental health issues. For information, visit didihirsch.org.