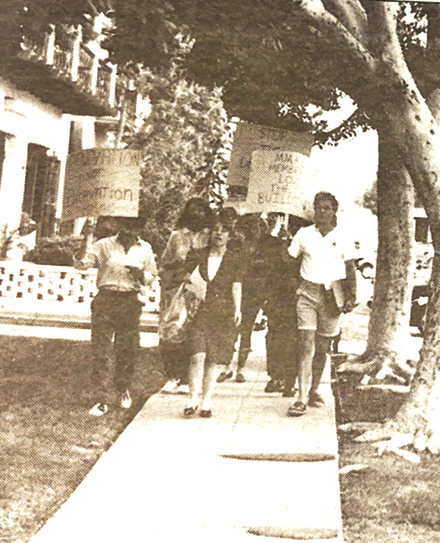 Residents of the Miracle Mile marched in this photograph from the May 16, 1991, issue of the Beverly Press and Park Labrea News against what they claimed was the destruction of the community’s character by developers building luxury housing. Members of the group, who called themselves the Miracle Mile Action Committee, were upset about apartment buildings being torn down in the neighborhoods surrounding Wilshire Boulevard. The issue has remained a concern in the Miracle Mile community for decades. In 2017, the Los Angeles City Council approved the Miracle Mile Historic Preservation Overlay Zone based on a plan spearheaded by the Miracle Mile Residential Association. It protects more than 1,300 properties, including many built from the 1920s through the 1940s, from being demolished. The HPOZ requires many exterior changes to properties to be reviewed by the Los Angeles Department of City Planning. For information, visit miraclemilela.com/hpoz and planning.lacity.org.