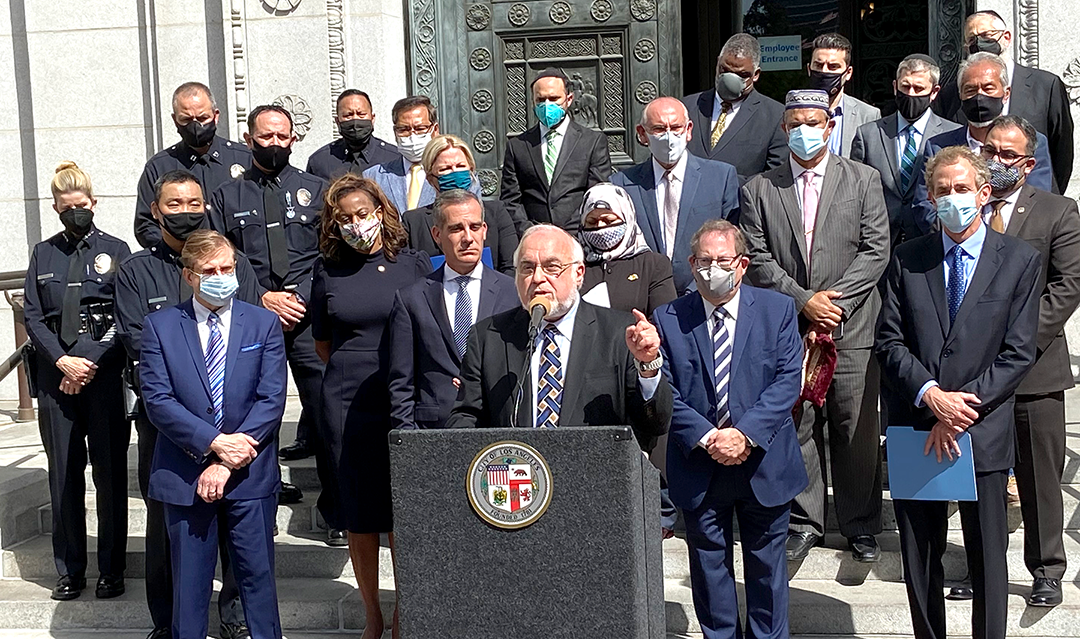 Rabbi Abraham Cooper of the Simon Wiesenthal Center expressed confidence that all of the perpetrators of recent hate crimes against members of the Jewish community will face justice. (photo by Edwin Folven)

Two men have been arrested for an attack on May 18 on La Cienega Boulevard that is believed to have been a hate crime committed against a group of Jewish individuals by members of a pro-Palestinian group.

The suspects, Xavier Pabon, 30, of Banning, California, and Samer Jayylusi, 35, of Whittier, were taken into custody on different days in different locations. Pabon was arrested on May 21 at an undisclosed location outside the city of Los Angeles by the United States Marshals Service, police said. Detectives from the Wilshire Division arrested Jayylusi on May 25 in Anaheim.

Both men were booked for assault with a deadly weapon. Investigators are in the process of presenting the cases to the Los Angeles County District Attorney’s Office and will ask that hate crime charges be filed. Greg Risling, spokesman for the D.A.’s office, said Wednesday that the cases had not yet been presented by the LAPD.

The attack occurred at approximately 9:50 p.m. at Fumi Sushi, located at 359 N. La Cienega Blvd. Cell phone footage from the scene posted on social media showed a group of a pro-Palestinian demonstrators slowly passing by the restaurant on La Cienega Boulevard. Some allegedly made antisemitic slurs and allegedly attacked a group of Jewish individuals who were dining on the sidewalk in front of the restaurant, police said.

Nobody sustained serious injuries requiring hospitalization in the attack, police and fire department officials said. The suspects fled before officers arrived. Authorities are still searching for at least three additional men in the attack outside the restaurant.

Detectives are also still investigating whether the attack on May 18 was connected to another incident the previous night near La Brea and Rosewood avenues in which a Jewish man was chased by a vehicle displaying a large Palestinian flag. That incident was captured on security camera footage. The victim ran through a parking lot and escaped unharmed, police said.

The attacks on the Jewish community were widely denounced. Government leaders, law enforcement officials and clergy members came together at Los Angeles City Hall on May 20 in solidarity against hate crimes and violence in Los Angeles.

The leaders said it was important to show a united front against hate in response to the recent attacks on the Jewish community. Los Angeles Police Department and Los Angeles County Sheriff’s Department officials said they are working with the FBI to combat hate crimes and are taking a zero-tolerance stance. LAPD Assistant Chief Beatrice Girmala reiterated the need for people to be vigilant and to immediately report incidents to law enforcement.

“This violence cannot stand. L.A. is the second city of every national and ethnic group in the world,” Cooper said. “I want to send a message to those criminals who think they can intimidate our community. We know that 99.9% of our neighbors are in solidarity with the Jewish community. I have every confidence that the LAPD and the sheriff’s department will have our back.”

Tarifi also denounced the attacks and called for peace.

“Any violence, of any and all sorts, should be condemned,” Tarifi said. “The Islamic Center of Southern California unequivocally condemns the attack. When I heard about the attack on Jewish Angelenos, I was outraged. I, as a Palestinian who advocates for the freedom and rights of my people, say that crimes against Jewish bystanders on the streets of Los Angeles are not acceptable. It doesn’t further the Palestinian cause, or any cause.”

The leaders spoke shortly after it was announced on May 20 that a cease-fire had been declared between Israel and Hamas following days of fighting. Local officials were hopeful the cease-fire would contribute to a de-escalation of racial conflict in Los Angeles.

“I want to be extremely clear. The fact that there is violence in the Middle East provides absolutely no excuse for violence on the streets of Los Angeles,” Feuer said. “We often talk about tolerance here, but there can’t be any tolerance for hate crimes. The crimes that we have seen in recent days were directed against members of the Jewish community, but let me be clear about hate crimes. Hate crimes don’t merely target their direct victims. Hate crime is designed to intimidate a community, hate crime is designed to instill fear in a community, and we are standing in a united way to say we will not be intimidated, we will not succumb to fear. We are standing here to take action.”

The Los Angeles Police Department is urging anyone with information about the recent hate crimes against the Jewish community to call investigators at (213)922-8230, or email wilshiremac@lapd.online.