‘The Mitchells’ imagines our iPhones fighting back to hilarious effect 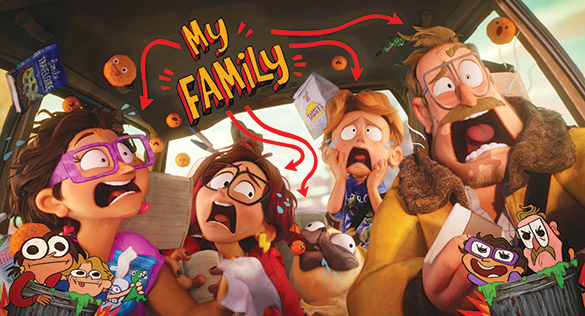 “The Mitchells vs. the Machines” is full of zany antics and fun adventures. (photo courtesy of Netflix)

Renowned comics writer Gail Simone said it best about the minds behind “The Mitchells vs. the Machines,” streaming now on Netflix. They “created one of the best films of the year and should get a parade,” she posted on social media. I can’t think of a more apt description.

“The Mitchells” belongs to a special kind of artistic wacky: smart, funny and awash with lovable characters. In lieu of a blank-slate protagonist, Katie Mitchell (voiced by Abbi Jacobson from “Broad City”) honors many on the production and post-production crew who once found solace in film school where little existed at home.

Katie never felt understood by her peers, and the home front isn’t much better. The night before she leaves for college, however, things brim over between the hopeful auteur and her dad, Rick (Danny McBride).

The two share special memories together, but time tarnished their father-daughter relationship. In one last attempt to salvage things, Rick plans a family road trip. Just in time, too, since a doomsday scenario emerges across the country.

Hell hath no fury like a phone’s operating system scorned, and PAL (Olivia Colman) – imagine a more sentient Siri or Alexa – won’t easily be replaced by the next-generation OS, PAL Max, robots that do it all. This should be the turning point in Silicon Valley history. Forget Stephen Hawking’s warnings about AI.

Alas, on launch day Pal Labs CEO Mark (Eric André) – I wonder how that name came about – witnesses a host of robots, now under PAL’s control, round up every human for a dire trip into space. If only Mr. Zuckerberg – I mean, Mark – treated folks – I mean, his OS – a little more humanely. Following a mostly successful global harvesting, however, only the Mitchells can prevent droid dominance.

“The Mitchells” takes a few cheap shots at American dependence on mobile devices. But those aren’t the only jokes on deck. The Mitchell family adventures, pre- and post-pseudo apocalypse, include several laughable endeavors. And a pair of injured robots who befriend the fam, wonderfully voiced by Fred Armisen and Beck Bennett, work their magic. 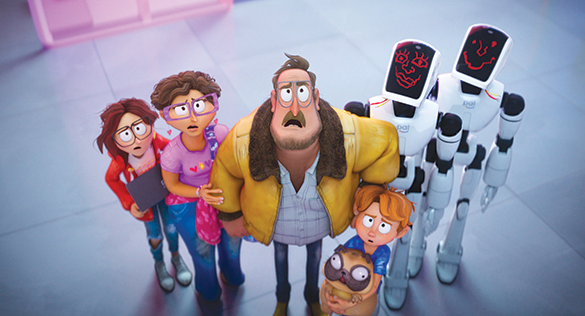 “The Mitchells vs. the Machines” is among the best animated features of the year. (photo courtesy of Netflix)

Stylistically, the Sony Pictures Animation film is a high schooler’s notebook come to life. Simulations of hand-drawn accents texturize key moments. We’ve seen this before in another Sony flick, “Spider-Man: Into the Spider-Verse.” What that one does to celebrate comics art, this one does with doodles once reserved for the borders of lined paper.

Add to those splices from popular YouTube videos and even image filters. This is a Gen-Z story, complete with the tech-savvy references, tropes and visuals to match.

All those remarkable details, along with a host of batty moments, stay consistent from intro to credits. While popular films across genres and studios overload the front end, they often settle for a conventional, plot-driven third act. Not here. The whole experience is a rollercoaster of color and shenanigans for nearly two hours.

But such aesthetic contributions fall flat without quality storytelling and memorable characters. “The Mitchells” wins at both. Certainly the pointed commentary stands out, but each sequence flows effectively, unfolding without any hiccups. And the Mitchells channel the best, and sometimes most dysfunctional, families on the big and small screen, from those crazy Bundy folks to the Wilkersons.

Katie is a splendid heroine, both charming and quirky. Her coming-of-age story feels familiar, but in “The Mitchells,” it gets an upgrade. Dear dad also goes on his own unique journey, forced to learn how computers work for the sake of Earth and, more importantly, his daughter.

In back-up roles, mom (Maya Rudolph) tries to keep the family together, a familiar role, but she enjoys some breakout scenes when she transforms into something else quite hilarious. As for little bro Aaron (Michael Rianda), he serves the supporting role well, equally as weird as the rest of his kin, including a major dino obsession and classic cartoon anxiety around his crush.

“The Mitchells vs. the Machines” is absurdly enjoyable, magnificently re-watchable, the combo of visually stunning and emotionally resonant. Thank writers and directors Michael Rianda and Jeff Rowe (both from “Gravity Falls”) and the haunting power of the Furby (just watch to find out more on that one).

I can’t call it the best animated feature of the year (“Raya and the Last Dragon” still has my heart), but this sci-fi family romp knows how to weave a tale worth revisiting and recommending for a long time ahead.