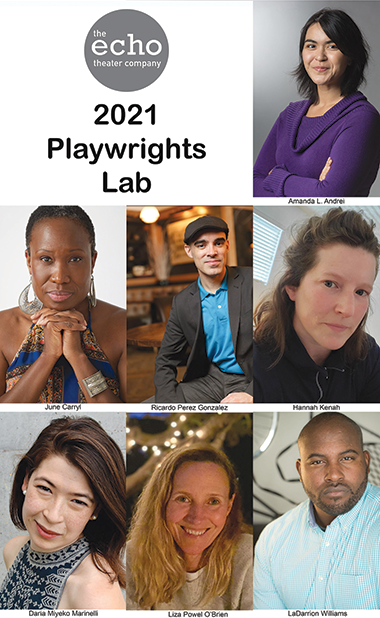 The honorees will develop material that will be presented in LABFest, the LAB’s festival of public readings at the end of the year. (photo courtesy of Echo Theater Company)

Los Angeles-based Echo Theater Company, dedicated to creating new work for the theater, has announced the names of seven playwrights who will participate in the company’s 2021 Playwrights Lab.

Facilitated by co-directors Brian Otaño and Hannah Wolf, playwrights Amanda L. Andrei, June Carryl, Ricardo Perez Gonzalez, Hannah Kenah, Daria Miyeko Marinelli, Liza Powel O’Brien and LaDarrion Williams will work together to develop new material that will be presented in LABFest, the LAB’s festival of public readings, at the end of the year.

Andrei has roots in the Philippines and Romania, hails from Virginia and Washington, D.C. and currently resides in Los Angeles. Her plays include “Black Sky” and “Lena Passes By.”

Carryl grew up in Montbello in northeast Denver and studied political science as an undergraduate before transitioning to the English literature master’s program at Brown University. Her plays include “Consortium.”

Gonzalez splits his writing time between his stoop garden in New York City and his window garden in L.A. Writing credits include the drag ball musical “Neon Baby.”

Kenah is a playwright, performer, director and devised theater artist. Her full-length plays include “Everything is Established.”

Marinell is a Japanese-Italian playwright who writes about nearly impossible long-cons, outcasts and underdogs trying to honor the wildness of their hearts, and the things we take for fact that are really just cultural mythology.

O’Brien is a playwright whose work has been seen and developed at the Geffen Playhouse, Blank Theatre, Unscreened LA, Naked Angels LA, Ojai Playwrights Conference, Hedgebrook and the Lark.

Founded in 1997, the Echo Theater Company has gained a reputation for producing and developing exciting new work. The Echo has won countless Los Angeles Drama Critics Circle, Ovation, L.A. Weekly and Stage Raw awards, and is frequently cited on end-of-the-year “Best of Lists” including by the Los Angeles Times, LA Observed and KCRW, among others.

For information about the Echo Theater Company and the Playwrights Lab, visit echoteatercompany.com.