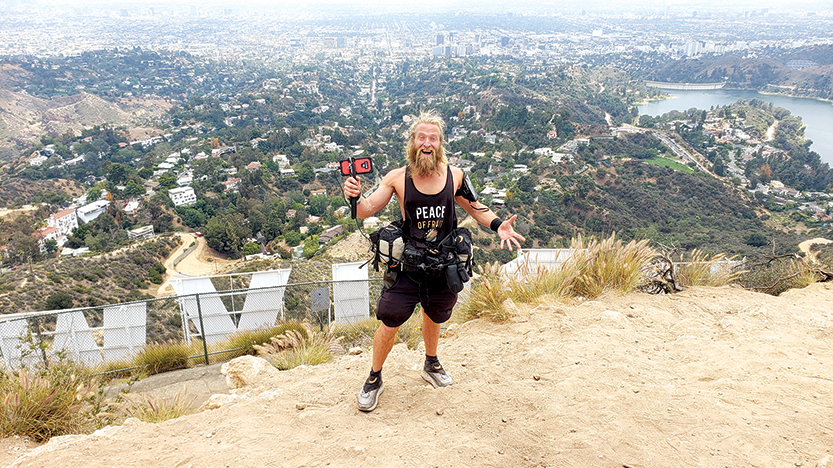 Seb Cam traversed the country for approximately 600 days and arrived at the Hollywood Sign on May 15. (photo courtesy of Seb Cam)

In a memorable scene from the 1994 film “Forrest Gump,” the title character decides one day, “for no particular reason,” to “go for a little run.” Forrest, famously portrayed by actor Tom Hanks, ends up running across the country, becoming an inspiration to many others along the way.

One of those people was Seb Cam, a 39-year-old from England who saw the movie in his mid-20s, and it sparked his imagination. He wasn’t a runner, but he dreamed about someday running across the United States, just like Forrest. That dream came true in 2019, when Cam packed everything he could carry on a single utility belt and headed to America.

“I just decided one day that I could do this, and let’s see what happens,” Cam said. “I applied for an O-1 Visa, which is for people of extraordinary ability, and it took a year and a lot of money. I had to prove I had the extraordinary ability and I ended up providing 15 letters of reference. When I had the interview, they ended up stamping my visa and said, ‘off you go.’”

With no spouse, children or career, Cam said he used most of the money he had saved on a plane ticket and started preparing in earnest for the journey. On July 4, 2019, he landed in Miami.

For most of the past 600 days, he has run varying distances, through all types of weather conditions, from six to 24 hours at a clip. Like Forrest, Cam didn’t take the easy route. He started by running the entire length of the Florida coastline, even traversing the state a couple times, and then headed up the East Coast to New York City. The trip took him through the Midwest, over the Rocky Mountains, to Las Vegas and through the Bay Area. The 4,000-mile run across America culminated on May 15 at the Hollywood Sign, which he selected for its worldwide recognizability.

Cam spent considerable time choosing what he was going to take on the cross-country ramble. He purchased the smallest and lightest laptop he could find, and opted for a hammock for nights outdoors. He said everything he needs weighs approximately 35 pounds.

“I carry everything I have on my belt,” Cam added. “I made a huge effort not to have a backpack. I have my necessities and even a couple of extra things for fun. I carry a basketball and I have a little pump so I can shoot around and play.”

Shortly after Cam’s journey began in late 2019, he started filming himself while running. Cam posted the videos on YouTube and they went viral. His YouTube channel currently has 3.9 million subscribers.

Cam said it was many of those subscribers who helped sustain him during hot days and cold nights along the route from coast to coast. He said he never got lonely because the videos and social media kept him in frequent contact with millions of people. Many came out to lend support – even during the COVID-19 pandemic – and offered places to stay. Others provided small sums of money so he could purchase food. Cam added that his entire trip was made possible by donations, and he estimated that he spent approximately $20 per day during the journey.

Cam also discovered the Couchsurfing app, which connected him with people offering free places to sleep. He said the hospitality he experienced was incredible.

“I didn’t let anyone know what’s going on. I just started posting videos and kept posting. YouTube is the master index,” he said. “I wasn’t willing to give up and it started snowballing. People just started showing support and I made a lot of friends along the way.”

Cam said one of those friends was Dustin Sprigg, from Boonville, Missouri, who he met through the Couchsurfing app. Sprigg was so inspired by Cam’s journey that he offered to follow along in his vehicle as Cam ran through the desert west from the Rocky Mountains to Las Vegas, providing support during one of the most arduous portions of the trip.

“I’d say all of the Couchsurfing people I met are memorable, but Dustin was one guy who helped me a lot,” Cam said. “He volunteered to be a support vehicle. We were together for around three weeks. It was a good example of someone who went beyond to help. I still keep in touch constantly.”

Cam credited his ability to accomplish the feat to his fruitarian diet, which requires strict adherence to eating raw fruits and vegetables. To celebrate his arrival at the Hollywood Sign, Cam enjoyed a fresh green smoothie.

“It’s four things: fruits, roots, rice and oats,” he said. “Those are the main foundation. They’re all you need.”

Cam also said his journey is not finished. He plans to stay in the L.A. area with friends for a while – the O-1 visa doesn’t expire for another year – but then it’s off to New Zealand, Australia or possibly Thailand to continue running. His goal is to traverse large areas of Asia before running through Europe and returning to England.

“People ask me why I’m doing it, and I’m still asking myself,” Cam quipped. “It’s to stay alive, that’s really it. If it inspires others to do this or only eat plants, great. I’m just going to prepare for what’s ahead and keep going.”

Cam was also modest about how it felt to attain his goal of running across the United States, just like Forrest.

“It was great, but I’m not stopping there. Now, running around the world is the plan,” he added. “I’ve set aside about 5 to 10 years. I’ve always said, ‘everything is within walking distance if you have the time.’”

SebCam is a true inspiration! What a LEGEND!!