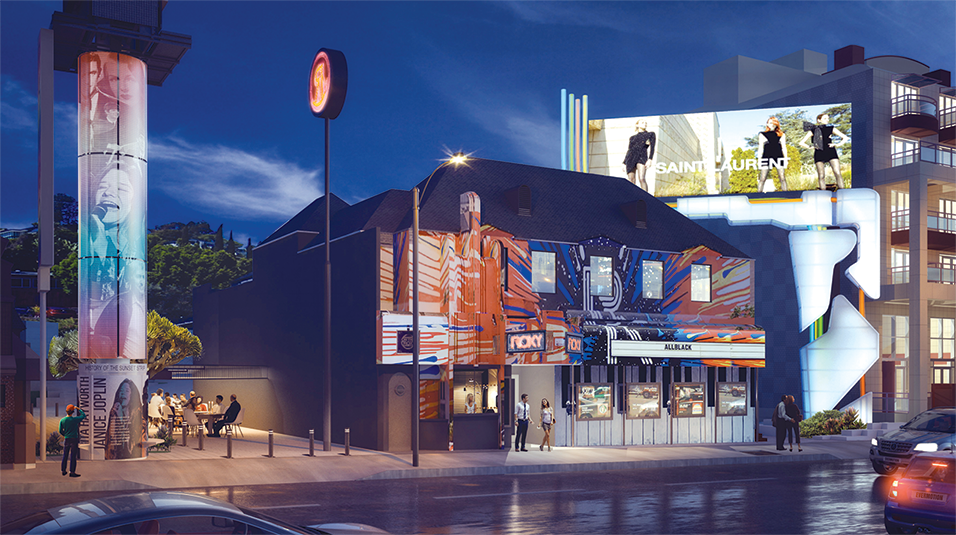 The adjacent Rainbow Bar and Grill and Roxy Theatre want to use new billboards to help recapture revenue lost during the pandemic. (rendering courtesy of the city of West Hollywood)

The West Hollywood Historic Preservation Commission approved a pair of billboard changes near Sunset Strip landmarks on May 24.

Mikael Maglieri, co-owner of the Rainbow and Roxy, as well as the Whisky a Go Go, said the businesses were hurt by the pandemic, as they were unable to host customers and concerts for long periods of time.

“The revenue from the new signage will be a lifeline for us,” Maglieri said.

Aaron Green, president of the Afriat Consulting Group, which represented the applicant, said the designs will accent, but not overwhelm, the properties, which the city declared local cultural resources in 2019.

“We want to make sure that we maintain the integrity of these resources … providing for an excellent sign design that would provide visual enhancements to the overall property and financial sustainability to allow these properties to remain for many decades to come,” Green said.

The commissioners were generally in favor of the designs for the billboards, including colored tubes that will accent the Roxy billboard. They did take exception, however, to a plan for the middle portion of the Rainbow billboard’s pole to include designs. While they had no issue with the ground-level portion of the pole including famous performers, the middle area – planned to be made of a perforated steel portion that would be internally lit – raised concerns. That decoration would distract visitors from the Rainbow Bar and Grill sign, which was included as a character-defining feature in the property’s historic designation, the commissioners said.

“I believe it does not allow the Rainbow … sign to communicate its significance,” Commissioner Edward Levin said.

The project team attempted to address the issue, with Green asserting that the Rainbow sign would remain prominent.

“We will be installing an ambient light reader at this site so we can take into account the real-world conditions of how bright the ambient light is … to ensure the illuminated pole structure is less bright than the [Rainbow] sign,” Green said. 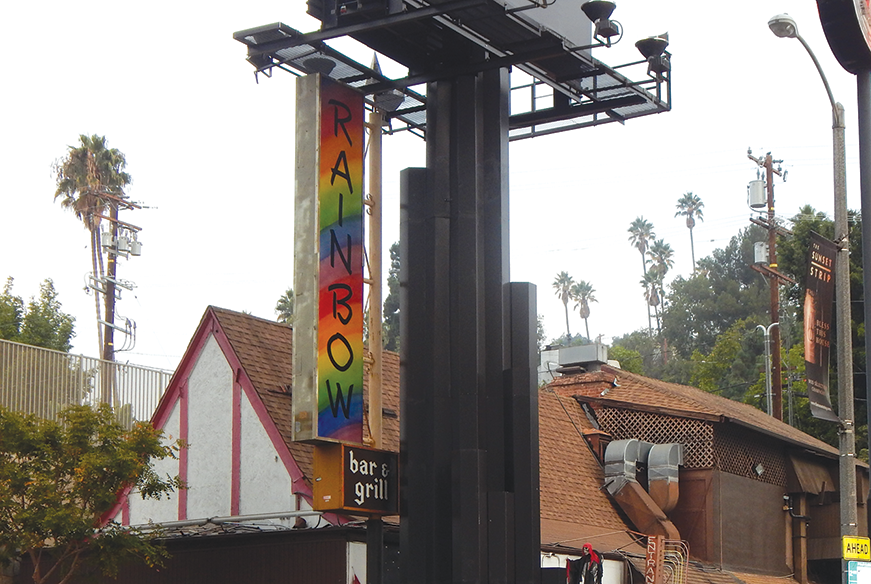 The commissioners, however, were not convinced. Commissioner Jacob Sotsky said the middle section of the design “competes with the Rainbow sign.”

“Anything that takes away from that sign is problematic for me,” Sotsky said.

During her comments, Chair Lola Davidson shared her recollections of being a visitor and patron of the venues, and she came to the same conclusion as her fellow commissioners.

“The Rainbow Bar and Grill sign is so important and so iconic, and I don’t want anything to take away from that,” Davidson said.

The project will next go before the West Hollywood Planning Commission.